Mostly body blow and cutting attacks
Original Zero (ゼロ(オリジナル), Zero (Orijinaru)) appears as a sub-boss in The King of Fighters 2001 and is the real Zero; the Zero in The King of Fighters 2000 is his clone. He was created because the supervising designer to his character claimed to be dissatisfied with Zero's design in 2000, hinting that ideas such as his black lion pet and this newer design were designed but not used. He is recognized by developers to be the first boss to surpass Krizalid -the supervising designer's previous character- in both fighting prowess and presence.

Unlike his clone, Zero is extremely loyal to the NESTS syndicate and was disgusted to learn of his clone's attempted coup d'état. He was resting in NESTS's main headquarters during the events of 2000 and was unaware of his clone's actions until later. He was ordered by the leader of NESTS to resume their primary plan of world conquest. Since the fighting data of the world's fighters had already been gathered and saved in the main database of NESTS's computers, the cartel planned to be rid of them and take over the then helpless planet. Willing to clear his reputation of his clone's actions, Zero is commanded to destroy the winners of The King of Fighters tournament. He traps the winning team in a space ship that was disguised as a blimp. He then informs the team about their real destination to NESTS's main headquarters in outer space as well as other information concerning NESTS's intentions. He fights the Hero Team alongside, Ron, Glaugan and the revived Krizalid. When he is defeated, he urges the team to escape the collapsing ship and presumably dies honorably on board the vessel.

Zero is extremely loyal to NESTS, he would probably be disgusted if he knew of Igniz's betrayal. In spite of his loyalty, Zero is an honorable man, a good example of this is that he likes to raise children.

Zero's fighting style is basically the same of the cloned Zero. He also has the help of three strikers: Krizalid, Ron and his pet lion, Glaugan.

Like his clone, he had no crouching attack animations, yet had standing attacks that must be guarded low, and could not crouch initially like typical SNK bosses. These animations and ability were gained as he was added in KOF2002UM, and is shared with his clone.

The King of Fighters 2001 winpose

The King of Fighters: Chapter of Nests: promotional art by Hiroaki

Original Zero in The King Of Fighters 2

The King of Fighters 2002 Unlimited Match 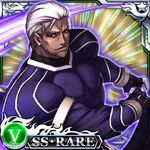 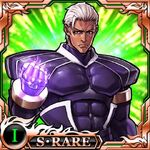 The King of Fighters: A New Beginning: NESTS cameo appearance in 13-1

The King of Fighters All Stars

Lady Zero from King Of Fighters All Star
Add a photo to this gallery
Retrieved from "https://snk.fandom.com/wiki/Zero?oldid=155348"
Community content is available under CC-BY-SA unless otherwise noted.