SNK Wiki
Register
Don't have an account?
Sign In
Advertisement
in: Templates, Characters, King of Fighters Characters,
and 20 more
English

Japan (but she doesn't really remember it very well)

Her friends, Earrings that are a keepsake of her late mother's

Kyokugenryu Karate + arrangement of personal styles
In this character name, her name is typically written in Katakana due to shared heritage, living and being prominent abroad, despite being born in Japan.

Yuri Sakazaki (Katakana: ユリ・サカザキ; Kanji: ) is a character introduced in the Art of Fighting series as a damsel-in-distress and eventually as a playable character. Since then, she has appeared in many SNK fighting games, alongside her older brother, Ryo Sakazaki. She is the first female practitioner of Kyokugenryu Karate. Yuri is also a recurring character in the Art of Fighting Team, and one of the founders of Women Fighters Team, along with King and Mai Shiranui.

Her official nickname is "The Wild Flying Swallow" (なる).

Yuri Sakazaki is a friendly young girl who always cares about her family and friends. She is a strong believer of innovation and trends, constantly finding ways to improve herself through change. She is often arguing with her father and Ryo over matters regarding her newfound sense of independence.

In the Art of Fighting series, it is heavily implied that she has a romantic interest in Robert after her kidnapping. As of Art of Fighting 3, she is confirmed to be in a relationship with Robert. Though still present to a certain degree, this attraction and relationship is downplayed in the King of Fighters series, and is sometimes the humorous cause as to why Robert is suddenly being beaten up by Ryo and Takuma.

Yuri uses the lowest-grade version of the Kyokugenryu Karate discipline, and is taught only the basic and low-level moves. To prove her own worth, she personally arranges the style to better fit her physique and persona. Among her own moves are the Slipstream Handslap/Hyakuretsu Binta (Hundred Rending Face Slaps), the Big Butt Press/En'yoku (Swallow Wing), Hien Hou'ou Kyaku (Flying Swallow Fenghuang Leg), and the more popular Yuri Chou Upper (Yuri Super Upper) with its added variations. Later in KOF 2002 UM, she even manages to create her own version of the Kyokugen-style's signature Ryuuko Ranbu (Dragon Tiger Wild Dance). Several of her techniques also have a flying swallow-naming motif.

Yuri's moveset is a running parody of various special moves from the Street Fighter series. This is very noticeable in The King of Fighters '96, when she received her Yuri Chou Mawashi Geri (Yuri Super Roundhouse Kick), which was similar to Sakura's Shunpuu Kyaku. Yuri has since then received various moves and other mannerisms that are parodies of these (both Capcom and SNK alike):

It is notable that KOF '96 came out exactly one year after Street Fighter Alpha, where Dan Hibiki (a character that parodies both Ryo and Robert) was introduced. It is because of this that Yuri can sometimes be taken as the counter-parody character from SNK to Capcom, given the impression "even a basic level Kyokugenryu Karate can perform Ansatsuken techniques".

In Capcom vs. SNK 2, when Yuri finishes a fight with a "Finest KO" (finish with a super move as a counter to an opponent's special or super move), she will attempt to tie her gi tighter. However, the belt becomes completely undone and her top opens, revealing a semi sheer undershirt. Yuri will then blush in total embarrassment and immediately cover herself. This victory pose first appeared in Art of Fighting 2 when Yuri scores a Perfect victory.

The King of Fighters 2002 Artwork

The King of Fighters XI Artwork

Yuri's Another outfit in the Maximum Impact series. 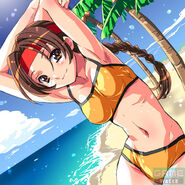 Yuri in the Art of Fighting TV special 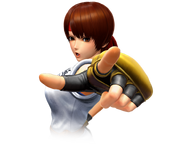 The King of Fighters XIV final concept by Eisuke Ogura.