'When I can put down my sword and enjoy a hot cup of tea.'

'I can sleep standing up.'

'...Its something I cannot divulge.'

'A nameless weapon of my own making'

Yumeji is unique to the roster due to having no definite canon gender; the developers to the game, Yuki Enterprise, entreated players to "believe whatever you believe Yumeji to be". To add to the confusion, Yumeji speaks in gender neutral Japanese in both official story and in-game text, and their voice actor is known for voicing both genders. Due to the openness of the statement, players still argue over Yumeji's gender to this day.

Despite the ambiguity, the game itself makes several interpretations; The English version of Samurai Shodown V identifies Yumeji as a male in the text dialogues, but storyline elements indicate Yumeji entered a nunnery later on. The art director for the game, Dorio Takaya, affectionately nicknamed Yumeji as "Souji", a reference to the Shinsengumi captain, Okita Sōji.

They are voiced by Mitsuki Saiga.

Yumeji is the sole successor of Sakon Kurokouchi, a sensei of iaijutsu and the previous mentor of Ukyo Tachibana. However, for a dubious reason concerning body issues, they were expelled from the family dojo and living facility. Yumeji follows Gaoh and swears to serve him as his "right arm". In the end, they are defeated by Ukyo and begged for death to avert disgrace. Ukyo, however, only cuts off a part of Yumeji's ponytail and ordered them to return home. Yumeji instead becomes a nun. One year after Gaoh's defeat, Yumeji tricks and beheads Rasetsumaru. Their father and the rest of his disciples were later slain by Zankuro Minazuki.

Yumeji is a very serious person, with body issues that are probably gender-related. Outside conflicts, Yumeji idolizes Ukyo, and Ukyo seems to also admire their swordsmanship as well, likely because they were trained under one teacher.

As Yumeji shares the same fighting style as Ukyo, they borrow several poses and animations from him. The main deviation between the two, however, is Yumeji's ability to briefly morph into aspirations of other characters to perform their signature moves.

However, in Samurai Shodown VI this ability is removed, and Yumeji now revolves more around advanced iaijutsu and projectiles with moves based on Ukyo's Bust move list from Samurai Shodown IV; Yumeji's version of Ukyo's Sasameyuki involves throwing a persimmon instead of an apple. 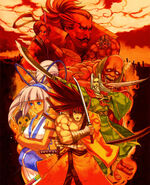 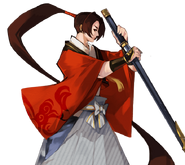