Emperor of Destruction, Yuga (壊帝ユガ, Kaitei Yuga), often referred to as Yuga the Destroyer and the "mysterious puppeteer", is the apparently genderless main antagonist for the Samurai Shodown 64 iterations of the series. Due to balancing issues, it is left unplayable in most of the games it appears in. It is seen both in the male and female bodies. It is symbolized by fetuses and eyes. An Alien-like creature is depicted in its crest.

Its existence is veiled in mystery. It is a powerful sorcerer who originates from the Demon World. It wishes to become a god of destruction and rule the world by merging the Demon World and Human World. Knowing it would require many followers, it concocts an elaborate plan. Twenty years before Amakusa's revival, it enters the human realm and steals various babies from their mothers' wombs. Using its powers, it bestows fantastical powers upon them and waits for them to mature their superhuman strength and paranormal abilities. When they reach adulthood, it appears before all of them, brainwashing them by performing a magical puppet show and effectively creates a powerful and obedient army of warriors. Along with these braindead individuals, Yuga obtains Shiki.

Yuga, seeking Shiki's male counterpart, chooses Haohmaru to fulfill the requirements for a perfect resurrection. However, Yuga's physical form is destroyed by Haohmaru. A year later, it subsequently resurrects itself and Gandara, and continues its plans, making a clone of Asura in the process. It sends this doppelgänger to retrieve the freed Shiki, but he develops feelings for her instead. Taking this into account, the two Asuras both engage Yuga, destroying its body for good along with Gandara. In a desperate attempt to remain in the mortal realm, it possesses Shiki and Asura's child, Mikoto. It lives as the "Devil" side of Mikoto's power as a "dark presence". It almost succeeds in gaining complete control of Mikoto's body but Yuda, the product of the two Asuras' merge, destroys its spirit before the deed is done.

Evil and ambitious, Yuga will stop at nothing to fulfill its desires. True to its other known alias, it enjoys toying and controlling other people's destinies.

Yuga relies entirely on its magic to fight. It has at least three different forms, two of which the player fights normally; the third is unleashed by Yuga when it does its desperation move. The first game mostly limited Yuga to being a strong but somewhat predictable fighter who worked well at any range. At one point, it also levitated high above the playing field and blasted the entire stage with a hard-to-avoid blast.

In its first appearance, Yuga has only two forms. The first form only has two moves and short range attacks. Its second form is unlocked when its first form is defeated. In this form it gains access to more abilities such as healing and time manipulation.

In the second game, Yuga's fighting style changes based on the particular form it inhibits. Its masculine, first form usually fights at close-range and uses its anti-air and long-ranged laser attacks to trap opponents. Its feminine, second form turns into an offensive long-ranged fighter that uses various keep-away tactics, such as its stretching arms and energy pillars, to corner opponents. Its third form is a winged feminine figure that gains additional abilities and can blast the entire playing field with various laser attacks; it moves faster and deals much more damage than its previous forms. 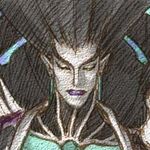 Yuga's female form in Samurai Shodown 64-2
Add a photo to this gallery
Retrieved from "https://snk.fandom.com/wiki/Yuga_the_Destroyer?oldid=138219"
Community content is available under CC-BY-SA unless otherwise noted.