He was a monster when he gained consciousness

The Exposed Bone (剥き出しの骨, Mukidashi no Hone), his own arm

During his concept stages, the creators wanted to add a "giant bald character" who was a "yōkai" to replace the character Earthquake. Creators wanted his character to make the line "Itadakimasu" very memorable. In the end, the design they created was "a mix of Genan and Earthquake". He was designed by Yasuhiro Nightow.

Kusaregedo was once a very kind man, but is transformed after his death into a gaki because of his cannibalism habit. In his present demonic form, he is cursed with an insatiable appetite. One day, he smells a young girl (Rimururu) not too far away and he quickly gives chase. He fails to capture and devour her, and instead finds a girl named Hakana, his daughter. Further troubling matters, Hakana was pregnant at the time, insinuating he would have a grandchild. She pleads for him to stop and to come back home. Sadly, he devours her. His current whereabouts are unknown.

Kusaregedo was driven to madness by his insatiable desire to eat. He could remember his daughter, but his hunger was stronger than his love.

As his character is a cannibal, a great deal of his attacks center on eating his opponent. His final attack, which was censored for international release, has him completely devouring his opponent whole save for their skull or hair. His weapon of choice is an exposed bone on his arm (presumably the ulna or radius) sharpened approximately at the wrist to form a spike. Kusaregedo's sprite also uses a hefty amount of space to fit on the screen (similar to other characters like Earthquake and the upright Tam Tam), weighing down his speed and jumps, as well as making him an easy target if his attacks miss. 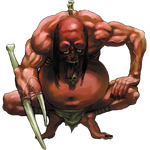 Retrieved from "https://snk.fandom.com/wiki/Youkai_Kusaregedo?oldid=148196"
Community content is available under CC-BY-SA unless otherwise noted.