Up to two players simultaneously

Ikari III: The Rescue
Victory Road (怒号層圏, Dogō Sōken), released on the Nintendo Entertainment System as Ikari Warriors II: Victory Road, is a 1986 arcade game where the objective is to defeat the enemy using grenades and other weapons. It is a sequel to Ikari Warriors.

The original arcade game featured an 8-way joystick that could be twisted in place to rotate the onscreen character allowing the player to face in one of eight directions while moving in another. The arcade version features sampled voiceovers from the main characters and the game's bosses. For example, upon starting the game the player would be greeted by a giant floating head who would exclaim, "Warriors! Show some guts! You can't escape me! Come get me if you can! Ha ha ha ha haa!" At this point the floating head would fly off screen and the gameplay commenced. Also, when the player loses a life, upon coming one would hear "Come on, let's fight!".

The game features a suite of weapons updates over its predecessor. The player start with a Bazooka type weapon rather than a peashooter style machinegun. Weapon powerups are scattered throughout the levels often hidden under rocks destroyable by the bazooka weapon or grenades.

The NES version includes the added feature of collecting "zeny" as currency. This money was then spent at a store also unique to the NES port where the player could buy improved weaponry and armor. The NES version emulates the controls of the arcade version by locking the facing of the character in one direction for as long as the "fire" button was depressed. 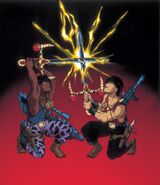