Twinkle Star Sprites: La Petite Princesse
Twinkle Star Sprites (ティンクルスタースプライツ Tinkuru Suta Supuraitsu) is a competitive scrolling shooter created by ADK in 1996. It was initially released as an arcade game for the Neo Geo platform. It was later ported to several systems, including Sega Dreamcast and the PlayStation 2. The gameplay, which can be characterized as a combination of a fixed shooter and a versus puzzle game, uses combinations of shots, as well as timed powerups to attempt to damage the opponent. These attacks also serve as counters to the opponent's attack.

The Sega Saturn port also has an animated intro. This was included as a bonus feature for its PS2 sequel. Pony Canyon released a limited-edition soundtrack album for this game on February 2, 1997.

The land is covered in darkness by Mevious and his minions. In order to save the land from further suffering, Load Ran leaves her home to look for the magical Twinkle Star, an artifact that is said to grant any wish. She succeeds in her mission and peace is returned to the world.

There are two types of standard attacks: a normal shot and a charge-up shot. Each character starts with two bombs which enables him in the event of desperate plight, to clean with the screen while briefly acquiring a state of invincibility. The two players' playfields are separated by a vertical bar, each one having its own independent of the other. Series of enemies arrive from the top of the screen. The player is to successfully destroy them in chains (combos), which will send one or more fireball projectiles to the screen of his adversary (Normal Attack). Shooting at Normal Attacks several times reflects them back as glowing Reverse Attacks. If Reverse Attacks are reflected again, a number of powerful counterattacks in the shape of one or more indestructible enemies appear (Extra Attack). Reflecting many Reverse Attacks at once can instead summon a boss (Boss Attack).

A sequel entitled Twinkle Star Sprites: La Petite Princesse was released in 2005 on the PlayStation 2. 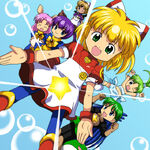 Reworked image of the Dreamcast cover for the first game. Illustrated by Yoshinoya.