Tsunami (つなみ) is a character created for the Koi no Iroha series. Her first appearance in any media was a hard-cast figurine. Her alternate color has her with blond hair and an orange tinted outfit.

Tsunami is Iroha's rival who claims to be better than her in practically every way. She meets Iroha's master by chance and was charmed by his sincerity. Despite his protest, she signs herself to be his maid and is offended to see her rival there. She uses various tricks to sway their master's attention in her favor but it's undecided on which girl he prefers.

A prideful and manipulative woman who hides her true intentions with a coy and submissive visage. She relishes every asset she has over Iroha and is jealous of her rival's accomplishments. When she's not busy planning her rival's downfall, she is actually a bit clumsy and easily embarrassed of any faults she has.

Tsunami fights with a large shield. 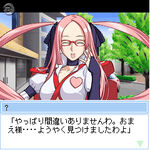 Tsunami in Koi no Iroha. 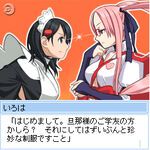 Iroha and Tsunami facing off.
Add a photo to this gallery
Retrieved from "https://snk.fandom.com/wiki/Tsunami?oldid=149641"
Community content is available under CC-BY-SA unless otherwise noted.