The only picture of her mother

Cooking (though she is bad at it)

Tsugumi Sendo (千堂 つぐみ, Sendō Tsugumi) is a Fatal Fury character from Fatal Fury: Wild Ambition. She is a female high school wrestler and one of the two original characters in the game, along with Touji Sakata.

She is voiced by Kayo Deguchi (current name: Satsuki Tsuzumi).

A high school student who has entered a student exchange program in Southtown, Tsugumi soon finds herself submerged in a town with an unnatural passion for fighting. Although it wasn't precisely the kind of town she expected it to be, filled with crime and evil ambitions, Tsugumi found it to be a great place to practice her wrestling skills that she had learned in Japan. Tsugumi hears the rumors about a new crime lord in town called Geese Howard, and is intrigued by the fact that Geese has defeated several fighters without contest. More so, Tsugumi finds it very interesting about the fact that many different fighters from different schools of martial arts roam the streets in search of a good fight. Tsugumi thinks that her trip to Southtown might just leave her something more than just school knowledge.

She is cheerful and friendly, but has a passion for fighting, so she challenges every fighter she sees.

Tsugumi fights with shoot wrestling moves. Some of her move names reference Osaka, like "Tsūtenkaku Driver", "Naniwa Lariat", and "Okonomiyaki-Ire".

Tekken Character Asuka Kazama bares some resemblance to Tsugumi. However Tsugumi is Friendly & Bright while Asuka is Arrogant & Relentless. Tsugumi does not have a victim to hate, but Asuka hates Feng Wei, Jin Kazama & Lili. 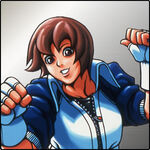 Artwork by Falcoon
Add a photo to this gallery
Retrieved from "https://snk.fandom.com/wiki/Tsugumi_Sendo?oldid=145300"
Community content is available under CC-BY-SA unless otherwise noted.