Those from the Past

Those from the Past (遙けし彼の地より出る者たち Harukeshi Ka no Chi yori Izuru Monotachi, lit. "Those who left their Distant Land"), alternatively known as "Those from His Distant Land", are the main villains in the third story arc, the Ash Saga, for The King of Fighters. They aim to awaken Orochi for their master, so that Orochi's power is given to him in order to pursue their real goals. Little is known about their members, but they have been implied to not be human. "His Distant Land" is implied to be Europe in Magaki's backstory.

Within old Europe, they were called "Devils", and people began to fight back against them. They have been stated to follow "the will of Gaia", similar to Orochi and his Hakkesshu. The group faced a dire situation when fighting the humans back in the distant past, and thus Saiki decided to use the "Gate" that controls time and the energy of an abnormal planetary alignment in order to travel to the future and regroup their forces. Their main objective is to reestablish themselves, reactivate the Gate of Time, and change history by eradicating their enemies before they become a proper threat.

Elisabeth Blanctorche has a personal vendetta to stop and destroy them.

The trailer for The King of Fighters XIII shows them being composed of at least 10 individuals, while Saiki serves as leader.

Saiki's erasure from existence resulted in Verse's appearance and the events of KOFXIV. It is not explicitly confirmed however if Saiki, Mukai or Magaki was inside Verse as well which would also result in their revival. 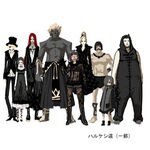 Those from the past, concept arts

Those from the Past on the "bad ending" of KoF XIII.
Add a photo to this gallery
Retrieved from "https://snk.fandom.com/wiki/Those_from_the_Past?oldid=139073"
Community content is available under CC-BY-SA unless otherwise noted.