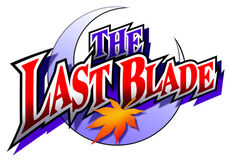 The Last Blade (, lit. "End of Edo Romance"),is a fighting game series created by SNK for the Neo Geo system. The title in Japanese is "End of Edo Romance: Swordsman of the Moon Flower". The Last Blade and its sequel are widely considered to be two of the most accomplished games available for the Neo Geo system, with fan opinion divided as to which is the better installment.

The game takes place during the late Tokugawa shogunate era in Japan (more precisely during the Bunkyū and Genji eras), and incorporates various elements of Japanese mythology. As such, the background music generally incorporates synthesized instruments simulating a sound appropriate to the 19th century setting, in a Western classical, pseudo-Romantic style (unusual for a fighting game). Many characters from the series take intentional inspiration from the manga, Rurouni Kenshin. Developers state that it was a friendly nod to the mangaka for being a well-known fan of the Samurai Shodown series.

Long before humanity existed, in a far off time of myth, death was an unknown, equally distant concept, but when death first came to the world, the "Messenger from Afar" was born.

With time, the Sealing Rite was held in order to seal Death behind Hell's Gate. At that time, two worlds, one near and one far, were born. Thus the history of life and death began.

Half a year has passed since Suzaku's madness, and the underworld is still linked by a great portal. Kagami's great sin is still heard as if ringing from the heavens. Our world has been called upon. Legends of long ago told of the sealing of the boundary between the two worlds. The Sealing Rite would be necessary to hold back the spirits of that far away world.

However, the Sealing Rite brings together the power of the Four Gods and Sealing Maiden, for the first time properly completing the ritual.

To find the Sealing Maiden, Genbu began searching in the center of the world, from which all things begin. At the same time in the underworld, in the depths of darkness, many spirits conspired, plotting to hinder the Sealing Rite. They had but one wish, to be reborn into our world.

Here is the series' official timeline. Like the Samurai Shodown series, the chronology of the series takes place in the Edo period (in this case, during the last years of the period):

The Last Blade series is seen as a spiritual successor to SNK's popular Samurai Shodown series, due to it being a similar 2D weapons-based fighting game. The game's mechanics are characterized by two selectable fighting styles, and a unique combo system along with a "deflect/repel" (Hajiki) system which involves pressing the D button at an opponents attack. Upon deflecting, the opponent is left open to attack.

The special moves are traditionally known as "ōgi" (secret skills) in the Japanese script, with the desperation moves/DM's being known as "Chō Ōgi" (Super Secret Skills).

Introduced in The Last Blade

Introduced in The Last Blade 2