The King of Fighters XIV

The King of Fighters XIV

The King of Fighters XIII

The King of Fighters XV
"Burn To Fight."

The King of Fighters XIV (ザ・キング・オブ・ファイターズ ) is the fourteenth installment of The King of Fighters series. It was first announced during the SCEJA Press Conference 2015.[1] The game was developed for the PlayStation 4 and released in August 2016, it was later ported to the Microsoft Windows platforms (Steam and GOG) and Japanese arcade cabinets (NESiCAxLive) in 2017 (the GOG version was released in 2020). This game is the first chapter of the fourth canonical saga for the series. It is also the first game in the series to not be developed first for the arcades, and the first game after SNK renaming to his original name. Garou: Mark of the Wolves battle designer, Yasuyuki Oda, is the director and producer.

Oda said in an interview with the website 4Gamer that the main goal for this title is to make it "the easiest to play" of the series. According to him, the two major reasons for making the transition to 3D is to adapt to high-end machines and give 3D experience to SNK so they can compete in the console market again. He thinks it's difficult to properly convey the KOF cast's charm in 3D but expects the models to continue improving from its initial revealing. Oda hopes to cater to fans of KOF '98, KOF 2002 and KOF XIII with this game's mechanics and improve the online matchmaking for this entry.[2]

After considering the current market and the future, the staff agreed that things would be best if they challenged 3D right now and started building up experience, knowledge and libraries in their company.[3]

SNK has a lot of development teams especially in the mobile/smartphone side of things, but they only have two studios. One of them is making the KOF series, and they barely had enough staff to make XIV.[4]

The King of Fighters has become a major business, generating huge profits and numerous spin-off tournaments worldwide. However, this led to a lowering of the overall quality, and voices began to rise across the globe demanding the formation of one unique, worldwide KOF competition.

A billionaire self-proclaimed “first champion” bought out all the rights for the KOF Tournament. The announcement of a new KOF Tournament created unprecedented enthusiasm around the world. This excitement reached many of the classic participants of the legendary tournament directly in the form of an official invitation...

Unlike previous main entries, which employed hand-drawn sprite animation, The King of Fighters XIV uses 3D models more akin to the KOF: Maximum Impact series. However the fighting area remains on a strictly two-dimensional plane and keeps the same basic mechanics as its predecessors.

New Max mode systems allows players to access the EX special moves; activating this state requires one bar of the power gauge. EX super move can also be executed with just one attack button, instead of two.

Using three bars of the power gauge can allow players to unleash Climax Desperation Moves, the current "Strongest Level DM" in this game that follows somewhat in the prior Neo Max's footsteps. Some characters gain new moves as a Climax DM, while others instead have their prior Neo Max reprised as a Climax DM.

Super Cancels are now based on 2003 along with XI's Dream Cancel, except it is now available to all members and has new traits available, such canceling a normal DM to an EX or Climax DM, or EX DM into a Climax DM.

Repeatedly hit the light punch button to perform an automatic combo attack called Rush mode; this will do lower damage compared to normal combo attacks. However, there some conditions involving Level gauge:

CD/Blowback attacks now cause opponents to hit the wall with a unique form of wall-slam, which causes them for a period of time to remain vulnerable to follow-up attacks.

Online multiplayer mode will feature a Party Battle mode which will allow three players to form a single team together to challenge another three player team. Players will be allowed to choose the same character if they wish while forming teams. The lobby is designed to support up to twelve players so spectators can join to watch the match up with an integrated voice and text chat. A "Crowd SE" option is additionally available for spectators will allow them to root, applaud, and boo their favored competing teams. Players will be allowed to set their online profiles to be private. An online training mode is available as well.

The Story Mode is composed of ten rounds and five cutscenes. Depending of the chosen team, the fourth cutscene can vary. The Japan, China, Official Invitation and Another World Teams earns special cutscenes. Before the two first cutscenes, the player can face a team with a character of 1, 2 or 3 DLC characters, mixed with 1 or 2 original characters.

Note: These are the default control schemes. You can change them at any time with the Options Menu or by pausing.

Note: In the Japanese PlayStation 4 & PlayStation 5 version, the Buttons used for Confirm and Cancel are reversed.

KOF XIV also marks a huge change for the series in that the large majority of the returning cast now sport new voice actors, including those who have been voiced by the same actors since their debut or for several years. The exceptions include Benimaru, Chang, Choi, Geese, Athena, Kula, Maxima, King, Whip and Oswald. Characters with recent changes, such as Kim, Ralf, Nakoruru and Mai still retain their new voices (some earned in KOF XII and XIII).

This game is the only in the series with a large quantity of new characters. The new additions to the roster (between originals and of the other franchises) are:

Note 1: Some teams remains with their classic formations. Regarding teams, the list is as follows:

Note 3: Some characters, although they have debuted canonically or officially in this game, have already appeared in other games in the series or in spin-offs. Therefore:

Note: As in KOF XIII, the DLC characters (including Rock Howard, from Garou: Mark of the Wolves, and the newcomer Najd) have no impact on the story of the game.

Note: By playing with these formations in Story Mode, the player unlocks special illustrations. All of them were made by Eisuke Ogura.

Characters who appear as cameos in Team Stories and Endings.

Note 3: In Story Mode, the Japan and Official Invitation Teams are the only teams to be faced after the first cutscene, and the DLC characters are always faced before the second and the third cutscenes, respectively.

In this game, there are special songs that play during specific matchups. This themes can be either original or from past games.

With exception of Rock and Najd, the DLC characters themes are extracted from past games (the most played in the first appearance in the series). Below, the list:

On January 31, 2017, SNK announced a manhua which would cover the game's main story. The first chapter is released on February 1, 2017.[5] The series ended with only 8 chapters released.

A new manga series titled A New Beginning illustrated by Kyoutarou Azuma is released on January 1, 2018. The series is published bi-weekly on Pocket Shonen Magazine online and is collected monthly on the Shonen Sirius magazine. The manga had its last chapter published on August 24th, 2021.

Many reviewers commented on the fighting system;

Reviewers also commented on the narrative and its cast:

The game's 3D characters received negative comments for their poor designs compared to other games of the same generation:

The Steam version of The King of Fighters XIV received mixed reviews: 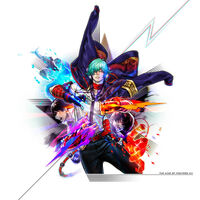 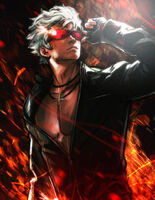 The King of Fighters XIV: Retailer exclusive art of K', by Hiroaki 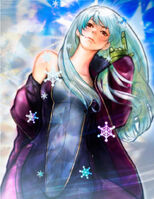 The King of Fighters XIV: Retailer exclusive art of Kula, by Hiroaki 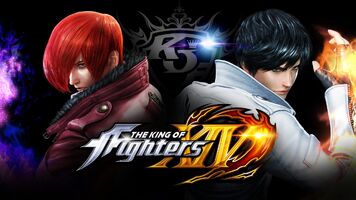 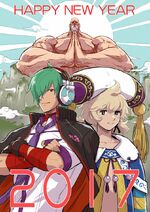 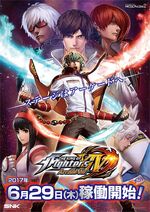 Arcade flyer, showing the four main characters of the series, Nakoruru and Meitenkun, by Ogura 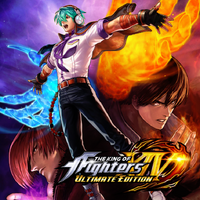 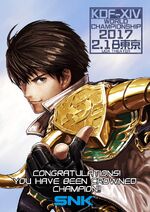 Kyo with the KOF belt, by Ogura 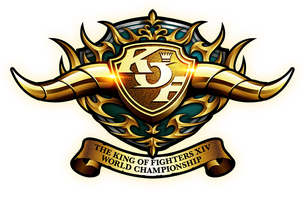 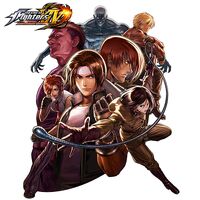 KOFXIV's One Year Anniversary, by Ogura 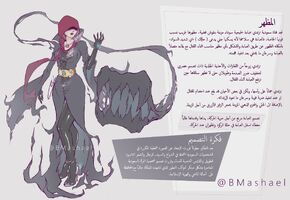 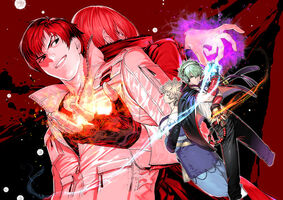 Promotional teasers of the game, showing some characters.

THE KING OF FIGHTERS XIV - Characters Trailer US

Promitional trailers of the game.

Showcase of the game's teams.

This videos appears only during the DLC Season 1.

Promotional teaser of DLC seasons' characters of the game.