The King of Fighters XII

The King of Fighters XI

The main illustrations were done by Eisuke Ogura.

The game underwent a complete graphical overhaul, confirmed by Nona, artist in charge of the art in the The King of Fighters XI endings. All the sprites used in previous games for over 10 years were to be dropped and replaced with new high definition sprites. The programmers have stated their intention was to create the "ultimate 2D fighting game". Nona reaffirmed this once again in The King of Fighters Year End Party 2006 in Tokyo.

SNK Overseas Manager Yoshihito Koyama revealed that the game was going to be "3D mixed with 2D"; this led to speculation that the game could use cel-shading to give the game a 2D look, but it was later revealed at AOU 2008 that KOF XII would use newly-drawn 2D sprites on detailed 2D backgrounds. Producer Masaaki Kukino informed Kotaku that the game is one hundred percent hand drawn, there being zero cell shading in the game. He has also stated that the main goal of the game is to give a new "rebirth" to the series. They have no intention of changing the main series into 3D in the future. The staff decided to create the new graphics during 2005 and 2006, and commented that they spent triple the amount of time developing it than the previous game.

In an interview with Fighters Front Line, Kukino replies that each character took 16~17 months to complete with a team of 10 different designers. Additionally, the sprites were personally checked by Nona for quality. Due to the time demands of drawing such detailed frames of animation, as well as the decision not to incorporate older assets as previous games in the series have, there are only 20 playable characters, the lowest number ever in a game from this series. An interview with Kukino revealed that there would be console exclusive characters.

On February 14, 2008, the first gameplay footage was revealed to the world showcasing the new, much larger, higher-resolution pixel art sprites at the Arcade Operators Union Amusement Expo (AOU) 2008. The footage also revealed the presences of Benimaru Nikaido, Terry Bogard (reverting to his original Fatal Fury outfit), Athena Asamiya and Kim Kaphwan in KOF XII. A location test was scheduled in Japan for April 18–20, 2008, but was canceled for unknown reasons. Kukino later stated in an interview this was done because the staff felt they should show a more polished product than the beta they had at the time. There was also a recruiting ad for part-time positions on SNK's Japanese website, asking particularly for a game graphic designer with experience in animation and color design. A playable demo was available to the public at the 46th AOU on September 18, 2008 and the 2008 Tokyo Game Show on October 9, 2008. The January location test featured a new visual layout unlike those seen in the past. Macha Yusa stated that the last location test would take place on February 27~March 4 this year. However, news of another location test popped up for March 6~8.

KOF XII uses the usual 3-on-3 team system with each fight consisting of 5 rounds. The Tactical Shift System from The King of Fighters 2003 has been removed. Since there is no story for this installment, there are no default teams or team endings in the roster, so players are free to make whatever teams they desire.

The game returned to its standard four button layout. Players can still dash, backstep, and perform rolls as their evade. Recovery rolls can be done with any button and throws are now performed by holding a direction and tapping A+C when close. The C+D attacks are still present but the Guard Breaks from previous games (pressing C+D while blocking with a block of super energy) can now be done at any time. Super special moves will now be executed in real-time and in a similar manner as The King of Fighters '94, meaning that there's a single level superbar that gradually drains once it is maxed.

The newest addition to the game system are "Critical Counters". When the Super Gauge is at its Maximum stage, the player can time their attack to clash with their opponent's blow and leave them open for a devastating attack. After a successful counter, the player with the advantage can dash, combo, and even perform a special finisher attack with their character's desperation move. The time frame for this effect lasts as long as the green colored ripple from the clash is on screen; once it dissipates, the damage boost from the Critical Counter will end. Counters can be done on the ground or while airbone. The clashes of Critical Counters will only occur when strong attacks (or certain moves performed with strong attacks) connect simultaneously.

Each stage has two types of themes played for it. Depending on the stage, the themes can work with the depicted stage ambiance or play a standard musical riff. The music staff from the previous title were in charge of overseeing the production but were not the ones conducting the music. As a side note, the music played during the trailer is included as a track in the game.

To promote the game, SNK announced a cellphone series called KOFXII Tokusetsu Corner for the Yahoo and imode Japanese networks on August 1, 2008. Each volume features an original story and bio information for three characters that will be in the game's lineup (revealed to be Ash, Kyo, and Terry). The style that these are presented in is similar to the in-game profiles of KOF: Maximum Impact 2. These novelizations were later added to the character profiles on the official website.

On April 23, the series also had a collaboration event with the Japanese artsite, pixiv. For people who have a pivix account, the entries can be seen here.

Stadium Stage 2
Add a photo to this gallery

Note: With exception of Russia Stage, all stages also can be seen in The King of Fighters XIII, with some changes. 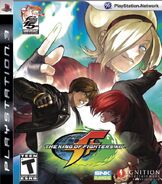 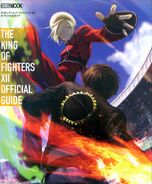 Retrieved from "https://snk.fandom.com/wiki/The_King_of_Fighters_XII?oldid=152052"
Community content is available under CC-BY-SA unless otherwise noted.