The King of Fighters '99

The King of Fighters 2001
The battle against the enigmatic NESTS delves to a more dramatic turn! End the 20th century with a finale of fisticuffs!

This King of Fighters entry has the introduction of Active Striker characters that add an extra dimension of strategy to game play. It also features Another Strikers and/or Maniac Strikers that are characters from other franchises in the SNK World.

This would be the last King of Fighters game produced by the original incarnation of SNK before the company's bankruptcy and later revival as SNK Playmore and re-renaming back as her original name. It was also the only game in the original series ('94-2003) not to receive a physical AES port in the US despite being primed in the ROM image. The reason for this is unknown.

"It has been a while since the existence of the mysterious secret syndicate NESTS was brought to light. Since then, however, their presence still remains a mystery and they've kept their activities well under wraps.

Meanwhile, in contrast to NESTS seeming lack of action, an increase in terrorist activities throughout the world has been taking place. Heidern and his band of mercenaries have determined that these events are the work of K' and Maxima.

Heidern and his band quickly begin pursuit of these two, but just as they begin their efforts, the invitations for the latest KOF tournament are sent....!

The fighters ready themselves for the tournament to begin in various venues throughout the world. Most remarkable among the invited teams is one in which K' and Maxima are listed as members! Moreover, NESTS whip into the second phase of their project, as if summoned into action by the two "terrorists."

Is the beginning of NESTS's activities a mere coincidence? Or, could it be...?

Once again a feeling of impending conflict stifles the air, and the curtain on the latest King of Fighters is about to rise...!!!"

After the KOF 1999 tournament, the commander of the Ikari Warriors, Heidern, is determined to figure out the objective of the NESTS cartel so that he can stop them from achieving their ruthless ambition. A fellow commander and long-time friend of Heidern, named Ling, tells the veteran fighter that K' and Maxima may hold the key to locating the whereabouts of the mysterious organization. Using this information, Heidern decides to focus his efforts on finding the duo so that they can be captured and interrogated for information. Meanwhile, the NESTS cartel sends Kula Diamond to investigate the tournament.

At the finals of the tournament, the Hero Team are taken to an underground mansion via a hidden elevator and are greeted by a mysterious but sinister-looking man. At the same time, Ling and a couple of his associates suddenly betray Heidern. In the underground mansion, the man known as Zero reveal he had the real Ling killed and replaced with a clone in disguise. Also, Zero tells the fighters that he was a former member of NESTS with plans to eliminate the cartel by using a powerful space-based weapon known as the Zero Cannon. To demonstrate his power, Zero fires a warm-up shot of the cannon towards Earth and wipes a city off the map.

The fighters battle against Zero not realizing that their energy powers the Zero Cannon. Zero is defeated and tries to fire the cannon again but it explodes. When K' and Maxima explore the ruined city above them, Whip appears and joins their cause to defeat NESTS.

SNK began making plans for The King of Fighters 2000 in June 1999. Former producer Takashi Nishiyama was absent from the team for the first time in the series. Because previous regulars from The King of Fighters games were not playable, SNK took advantage of the striker system and give players the choice of using Goro Daimon among others as alternative assisting characters. SNK found the Bogard brothers, Terry and Andy, unbalanced in the previous game because one of them was overpowered as a striker; the company joked that this was also a result of the love between the siblings.

One of the game developers said the team originally wanted to use more of the characters from The King of Fighters '99 but due to licensing issues it was not possible. The arcade version was nearing completion in mid-2000, with the staff becoming excited at the quality of the game. Despite early negative thoughts about the game's state, SNK was pleased with the completed title, citing the arcade as an appealing game. Following its release, SNK thanked the fans for their support. During the game's development, SNK went bankrupt, leading to the designers of the game causing multiple glitches, extra animations, and balancing issues. Some of the developers left the company, which resulted in the team in charge of the game becoming smaller.

New characters were created to appeal to different audiences. Mexican wrestler Ramón was made to appeal to South Americans because Neo Geo's was very popular in South America. Ramón's designer loved pro-wrestling fighting moves but the character's techniques were made unrealistic. Vanessa and Seth were originally set to appear in The King of Fighters '99 but they debuted on its Dreamcast port as strikers, while becoming playable in 2000. Vanessa was created to appeal to women; she is slightly older than the other characters, which players found appealing. Both the debuting Lin and the unplayable Ron generated a major surprise to the SNK staff because their addition to the story was not overlooked. Kula Diamond was created to give a major expansion to the NESTS cartel, while Zero was made to contrast with the NESTS agent Krizalid from The King of Fighters '99, who had a darker personality. SNK, however, was disappointed with Zero, leading to the creation of stronger new character connected with him in the next game.

For this game, here was an improvement of the Striker System, the ACTIVE STRIKER SYSTEM. Before, you can't summon a Striker unless you are not doing anything. But now, you can summon a Striker whenever you want except during a DOA Drubbing, but you can still call him upon finishing the move. You can even call Strikers when under attack or being thrown!

Another Easter Egg with the Striker System is that each character has 2 selectable Strikers: the normal Striker and Another Striker. This effectively doubles the number of Strikers available for the entire roster of fighters! Furthermore, certain characters even have a hidden choice called a Maniac Striker. Several Strikers hail from old school SNK classics as well as original or alternate characters, so be sure to discover their effects in battle!

As a bonus, as long as you have a stored power stock and you have less than the maximum amount of Strike Bombs carried, you can convert the power stock into a Strike Bomb by using the taunt. This can be a very good advantage in combat indeed. Take caution though, you can't cancel your way out of a taunt. Unlock the Maniac Striker by highlighting the character's Another Striker, then move the joystick Up, Left, Left, Left, Right, Right, Right and Down. Press any button to choose the Maniac Striker.

Note: Kula Diamond and Clone Zero aren't used as Striker characters. Clone Zero does not use any Strikers.

The new characters added to the roster (all originals) are:

The new formations of the teams are the following:

Art of Fighting Team (A.K.A. Ryuku no Ken Team)

Available in All Versions

Available Only in PlayStation 2 Version

The Following characters have an alternate third colored sprite which can be selected by pressing C+D at the same time: K', Benimaru, Terry, Mary, Ryo, Whip, Kensou, Mai, Choi and Kyo.

Note 1: The Factory and Wharf stages have frozen versions, both associated with Kula, and can be seen only in Team Play.

Note 2: The Boss Stage is also available in KOF 2002: Unlimited Match, with some changes.

Note 3: In this game, the stages are randomly chosen by the game's system.

Extra Stages (Only on Dreamcast)

In addition to the above, the Dreamcast version also features 20 past stages from other SNK games, which can be accessed by selecting the following Strikers on Player 2's team in the Versus and Practice modes:

In Japan, Game Machine listed The King of Fighters 2000 on their September 1, 2000, issue as being the second-most-successful arcade game of the month.

The PlayStation 2 port of The King of Fighters 2000 sold 37,316 units in Japan during 2002. In 2017, it became one of the most downloaded games of the PlayStation Classic collection.

The critical reception for the game's fighting system has been mostly positive. GameSpot said SNK improved most of the problems of its predecessor The King of Fighters '99 by adding more gameplay features such as new attacks and new additions to the Striker system. The reviewer said fans might either like or dislike the new characters based on the differences between them and the characters from The King of Fighters '99, and said the boss Zero is less overpowered than Krizalid but lacks his appeal. IGN agreed with GameSpot in terms of the Striker system and liked the additional characters, making it one of the best games of the franchise. In another review, IGN stated that the game offered many good new characters, particularly Lin. Nintendo Life also liked the addition of the Striker system because of the newly possible combos but said the game did not live up to the previous games. Pure Nintendo compared it negatively with Capcom's fighting game Street Fighter II but still said The King of Fighters 2000 provided enough depth thanks to its character roster and gameplay mechanics, making it a good addition to Nintendo Switch's games. Bonus Stage regarded it as one of the best games from SNK, saying it might appeal to gamers who previously enjoyed the predecessor and Garou: Mark of the Wolves.

The game's presentation drew mixed reactions. While Pure Nintendo enjoyed the character designs, backgrounds, and theme songs, IGN said these elements appeared dated due to similarities with those of previous installments and the improved graphics of new consoles. GameSpot said while SNK attempted to improve the designs of the characters, the quality was still not as appealing as it should have been and that the background stages felt hollow. Echoing IGN's comments, Bonus Stage stated that despite being a fighting game, the plot amazed fans because of the further exploration of NESTS organization, which is briefly explored in The King of Fighters '99, and said the game's storyline offers such an appealing dark ending that most of the fans wanted to play the following and final game from the NESTS saga to see its conclusion. HardcoreGaming found the PlayStation 2 port of the game superior to the Dreamcast version because the former fixed some slowdown issues and said Kyo Kusnagai's theme "Goodbye Esaka" was one of the best themes performed by SNK.

An audio drama CD was released by Scitron Digital Contents on September 20, 2000. It features two storylines: one exploring the first encounter between K' and Kula Diamond; the second story focuses on Athena Asamiya as she meets rivals in an airport. Series' writer Akihiko Ureshino wrote two light novels published by Kadokawa Shoten. The first novel, Strikers Strike Back, acts as a self-parody of the game's storyline and was released on February 19, 2001. The second novel, Icicle Doll, was released on December 20 the same year and features a more serious storyline. 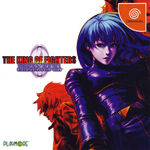 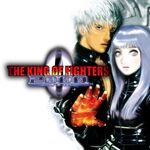 Promotional art of K' and Kula. Illustration by TONKO