The King of Fighters -Volleyball-

The King of Fighters -Volleyball-

A letter was delivered to powerhouses around the world, saying "The King of Fighters will be held again this year", signed only as [R]... Is [R] the one who has clashed with the warriors many times in the past? They headed for the venue in the midst of speculation. Yet, there was no way to know that this fight would be a volleyball tournament...

This "Fighting fighting volleyball" game where two characters tag team to face each other in a match. Playing in two lanes, the player selects who is the "attacker" and and who is the "receiver" (front and rearguard). The player advances to the next stage by getting 10 points or by reducing the opponent's physical strength to 0. This is possible via the use of special moves, which when they hit the opponent cause great damage. After winning a total of 4 games, the player will enter the last stage where the boss Rugal is waiting. Upon clearing the game once, if the player presses the # button in the Member Select screen, one can use Rugal as a hidden character. 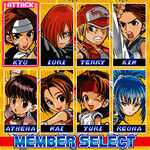 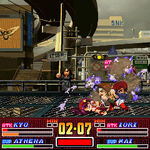 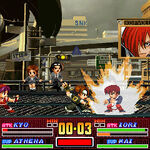 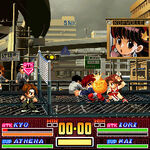 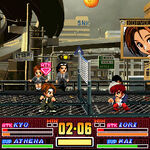