The King of Fighters '94

The gameplay of King of Fighters '95 was left largely intact from King of Fighters '94. The one major change SNK was to allow players to select any combination of characters to fight with, as opposed to the concrete teams that players were confined to in the previous game. In addition, almost all the teams from the first game returned, but were no longer affiliated with specific nationalities. The Sports Team from the previous game was replaced by a Rivals Team, composed of Iori Yagami (a new character designed to be Kyo Kusanagi's rival), and Eiji Kisaragi (Ryo Sakazaki's and Kyokungenryu Karate rival) and Billy Kane (bodyguard of Terry Bogard's rival, Geese Howard).

"It's the year of our Lord, 1995. Once again invitations to the King of Fighters tournament have found their ways to the world's most powerful fighters.

And their author is none other than the mysterious "R!" Could the "R" be that of Rugal, who supposedly blew himself up on his aircraft carrier a year ago?

Among the contestants for this year's tournament is the newly selected team of Billy, Yagami, and Kisaragi, who sent the American Team packing.

But what in the end is Billy's scheme? What ambitions does Kisaragi cradle? And what evil designs for his old foe Kyo Kusanagi spur Iori Yagami on?

These new challengers join all of the previous tournament's contestants-except the American Sports Team, of course-both in battle and the all-consuming intrigue that forms the core of King of Fighters '95."

The new characters added to the game roster (between originals and of other franchises) are:

The Missile Base (Saisyu's Stage) 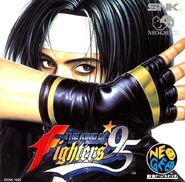 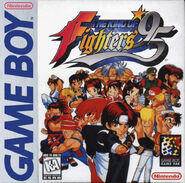 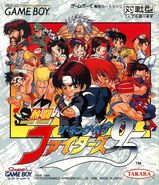 Japanese Game Boy
Add a photo to this gallery

Retrieved from "https://snk.fandom.com/wiki/The_King_of_Fighters_%2795?oldid=150834"
Community content is available under CC-BY-SA unless otherwise noted.