The King of Fighters '97
Violent fighting to come again! As a year flew by from the excitement, we now declare the opening of our special team tournament again... In 1996!

An epic selection of battlers in history! Can you feel the heat?

The game was ported to the PlayStation and Sega Saturn in Japan; the Saturn port requires a memory expansion cartridge to run. Like with '95, '96 would receive a Game Boy product based on it, called Nettō The King of Fighters '96 (ネット ザ・キング・オブ・ファイターズ ); it was also released in Europe, as The King of Fighters: Heat of Battle.

In terms of gameplay changes, this is the first game in the series to allow characters to run and roll, while also redrawing the sprites from the ground up from the prior installment.

The development period for KOF '96 dragged on right up to the time of its scheduled release. At the location test for the title, Mature and Vice were still not included in the game, since the staff did not have enough time to completely design them. While using Neo-Geo MVS, this one includes 68 KB of RAM of video and 64 KB of RAM. This made The King of Fighters '96 the first game to break the technical limits of the MVS system.

Kasumi Todoh was added to the cast since the coinciding release of Art of Fighting 3 had increased the character's profile. Geese Howard from Fatal Fury was first meant to appear in KOF '95, but developers abandoned this idea. When KOF '96 began development, the staff decided to make Geese become a playable character. The Boss Team in which he starred along with Mr. Big and Wolfgang Krauser received "special treatment", such as music for each individual member (in comparison to other teams, who only had one). Due to memory restrictions, some of the special moves that were designed for Geese had to be left out of the game. The sub-boss character, Chizuru Kagura, was the hardest one to create. Her pixelated image was completed in a month, and the designer in charge of her often worked until six in the morning. The game also meant to introduce Whip into the Ikari Warriors Team. However, due to Leona's introduction in the same team, the developers waited until The King of Fighters '99 to add her to the cast.

Like the previous game, a Game Boy game based on The King of Fighters '96 was released by Takara in Japan titled Nettō The King of Fighters '96 on August 8, 1997, and was released in Europe titled The King of Fighters: Heat of Battle in 1998. This version only includes 17 of the 29 characters in the original version. The Game Boy game features a secret code called "Carnage" mode, which allows the player's (including CPU) Power Gauge to be filled automatically without charging. This feature also enables the player to use powerful versions of their Super Special Moves and normal versions of Super Special Moves without having the player's health at a low rate. Characters exclusive to the Game Boy version includes Orochi Iori and Orochi Leona from The King of Fighters '97, a stronger version of Chizuru Kagura, the final boss of the game, Goenitz, and Mr. Karate (Takuma's persona in the original Art of Fighting).

An extensive database for the game, titled The King of Fighters '96 Neo Geo Collection, was released on February 14, 1997 to promote the year's title. It was available only for the Neo-Geo CD. The database includes the game's intro, an interactive reenactment of the game's backstory, character profiles spoken by their voice actors, outtakes, an exclusive gallery section from the creators, a complete command list and a sound selection. A similar version of this game, The King of Fighters '96 Perfect File, was also released for Windows and Macintosh computers. This version was released on June 18, 1997 and includes most of the features found in its predecessor

As the fighter takes damage and blocks attacks, the POW Gauge builds up, depending on the intensity of the hit. Being struck by multi-hit attacks increases the gauge faster. However, you can manually store power with the Power Builder Surge move, but leaves you very vulnerable. Once the gauge is filled up, it flashes MAXIMUM and your fighter's offensive power increases for a short while. During this maxed-out state, you can also perform your character's unique Desperation Move for devastating damage! The gauge remains at max for a limited time only, so make good use of the extra attack power and don't be afraid to use your Desperation Move before the gauge drains away!

The character's life gauge has 6 notches. Once the life gauge drops below 2 notches, the gauge flashes red. In this time of peril, your character can perform Desperation Moves indefinitely without the maximum POW Gauge requirement. An new feature to the game is once your life flashes red AND you have your POW Gauge filled-up, you can pull off a Super Desperation Move which deals up to twice the damage of the normal version (and has an altered animation)! It's a great way to turn the tides of battle! Certain situations during the fight may even allow you to perform Super Desperation Moves just by having a full POW Gauge!

In addition, the POW Gauge drains much faster when it is filled up to the max by blocking attacks or taking damage. Using the Power Builder Surge to store power grants you more time in Max Mode before it completely empties.

Furthermore, new to this game as a series staple onwards is the introduction of running (which replaces the forward hop dash that was readded later on in some modes) and the ability to forward roll and back roll (replacing the spot-dodge-styled sidestep and sidestep attack).

"Unlike the mystery surrounding previous KOF competitions, KOF '96 has become a major international event sponsored by a number of huge corporations.

Preliminary contests have been held in various areas throughout the world, and among the top nine teams are, naturally, the usual KOF contestants who have been looking forward to test their abilities in an official competition.

This time, however, there is a team among them who cannot fail to raise eyebrows, composed of Geese Howard, Wolfgang Krauser, and Mr. Big. The three who once attempted to conquer the world are now but mere contestants in this tournament.

Is their object, perhaps, to do away with the Bogard brothers or the disciples of Kyokugen karate?

If that weren't enough to surprise...Iori Yagami appears once again, teamed up with a pair of mysterious women.

How will the rivalry between Iori and Kyo Kusanagi that has cursed their two families since ancient time play out this time around?

This is KOF '96, held as an official recognized sporting event, over which dark clouds have already started to gather...."

This game is the first in which teams undergo substantial changes. The new characters introduced in this game (between originals and of other franchises) are:

An extensive database for game, titled The King of Fighters '96 Neo Geo Collection, was released on February 14, 1997 to promote the year's title. It was available only for the Neo Geo CD. The database included the game's into, an interactive reenactment of the game's backstory, character profiles spoken by their voice actors, outtakes, an exclusive gallery section from the creators, a complete command list and a sound selection. A similar version of this game, The King of Fighters '96 Perfect File, was also released for Windows and Macintosh computers. This version was released on June 18, 1997 and included most of the features found in its predecessor.

In 1998, the game was pirated to the NES by a company called Hummer Team. This version only includes 7 characters: Leona, Iori, Chizuru, Goenitz, Yuri, Goro and King. Originally, there were going to be 20 characters, but 13 of them were cut out. They are: Kyo (as "Kyu") Kusanagi, Benimaru (as "Benimary") Nikaido, Terry Bogard, Andy Bogard, Joe Higashi, Ryo Sakazaki, Kim Kaphwan, Ralf Jones, Athena Asamiya, Kasumi Todoh, Mai Shiranui, Geese Howard, and Wolfgang Krauser.

Note 1: The Yagami Team and Goenitz's stages don't have intros.

Note 2: This game is last of the franchise where the player can fight all teams in Arcade mode.

The Finals at Kagura Stadium

The Ruins of Kagura Stadium

In Japan, Game Machine listed The King of Fighters '96 on their September 1, 1996 issue as being the most-successful arcade game of the month. According to Famitsu, the AES version sold over 33,323 copies in its first week on the market.

The game received praise and criticism from video game publications, which commented on its new additions. The four reviewers of Electronic Gaming Monthly gave the Neo Geo AES version a 7.5 out of 10, citing the huge roster of fighters and retention of the series' strong playability. However, Dan Hsu and Sushi-X both criticized it for failing to improve graphically over the previous installment and thereby keep up with contemporary 2D fighting series such as Street Fighter. 1UP.com noted the game to be unbalanced in comparison to its prequel such as noting the projectile attacks needed to be improved. However, they liked the additions of Vice and Mature and more character interaction such as the special introductions between related characters, custom endings and custom winposes. Chris Wigham from consoleob.com also found issues with projectile moves, as the fights were closer. However, he noted the graphics to have gone through a big improvement in comparison to KOF '95. Zentendo.com writer Chuck Allen praised the improvements of music and voice acting such as the announcer's voice which is "audible and understandable". He also praised the addition of new characters to the cast as well as the boss Goenitz, who is easier to defeat than Rugal Berstein from KOF '95. In a review from the compilation The King of Fighters Collection: The Orochi Saga, George Damidas from entdepot.com commented that KOF '96 should be the first game as he praised the graphical improvements and the new characters appearing in the series.

Electronic Gaming Monthly editors named The King of Fighters '96 their Neo Geo Game of the Year, calling it "an excellent packaged deal for any fan of 2-D sprite-based fighting games."

The rerelease port obtained a good review by Nintendo Life based on the improvements SNK added to the title, such as balancing the gameplay, movements of characters but criticized the audio.

GameSpot noted the game helped start "a modest resurgence in the sales of AES consoles and cartridges." During its release week, the Sega Saturn port of the game sold 109,752 copies in Japan. As of 2004, the sales went to 155,116.

Ryo Takamisaki also wrote The King of Fighters G, a manga that retells the events of the game following Athena Asamiya. 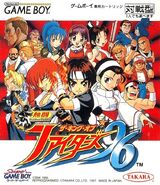 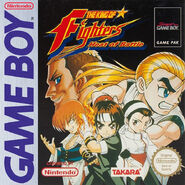