Unknown; 25 when the game takes place

Guardian of the Holy Forest? (Protector of the Fairy)

Searching the forest for fairies

Tashon Mao (ター・ションマオ （大熊猫）, Tā Shonmao, Hanyu Pinyin: Dàxióngmāo), whose name means "giant panda" when translated, is a character who appears only in Samurai Shodown: Warriors Rage. He is voiced by Naoki Oikawa.

Tashon Mao hails from China and travels to perfect his warriors skills. He enters Ritenkyo in a foreign skiff, mistaking it for the Japanese mainland. He chanced to see a fairy sprite (Nakoruru) in the forest and instantly becomes obsessed with her. Jealous of any strangers who may steal her away, he fights to ward off visitors and "protects" Nakoruru.

In his ending, he overhears her talking to Haohmaru and learns that someone is already waiting for her affections (implied to be Galford). He decides to give up on her and leaves the forest, lamenting that he can never find another fairy like Nakoruru again. Moments after he says this, Rimururu crashes into him.

He is an eccentric and comical character who often gets insulted by others for his outlandish attire and dialect. He tries to be polite to others by making idle conversation but his obsessive babbling for Nakoruru or himself often irritates his listeners. He is easily angered by the slightest offense.

He fights under pretense of bare hands, but actually wears a fake mechanical hand with retractable metal talons as a weapon. Talons are used to mortally wound opponent at close range. His fighting style is a near replica of Garyo the Whirlwind's style, with access to flying kick. Tashon Mao lowest defense in game but can fill his rage gauge at quicker rate.

Most of his attacks and moves are named after various animals. 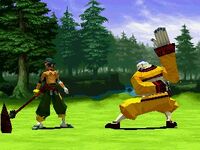 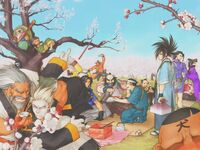