Cham Cham, removing his mask at times of peace

"All fear Tam Tam. Tam Tam is kind. But children run from me."

Blade That Cuts Through The Darkness (ヘンゲハンゲザンゲ, Henge Hange Zange), a kind of scimitar

He is the greatest warrior and hero of his village, Green Hell. Hearing from the village elders that their sacred artifact is missing, he takes the responsibility of retrieving their stolen treasure, the mysterious jewel called the "Palenke Stone" (named after Palenque). He retrieves it and returns peace to his village. He also protects his village from Amakusa a second time, but fails to prevent the thievery of the village's second artifact, the "Tangiers Stone". As divine punishment, he is transformed into a chimpanzee, Paku Paku. In this form, he helps his younger sister Cham Cham recover both stones for his village. In Warriors Rage, he becomes the chief of his village.

Tam Tam is a brave and revered warrior of his village, who truly loves his home and countrymen. He walks in his father's footsteps and hopes to make him proud. He enjoys peace and spends the time with his sister. Like other Green Hell residents, he worships the gods as his savior, knowing full well that failure to protect his people will bring their wrath. Since his mask is also considered a mask of the gods, he will only don it during a time of crisis.

Tam Tam rarely stands at his full height during fights, staying in a crouched position nearly the entire fight. He can use the length of his limbs and scimitar to stop opponents in their tracks with his light attacks being some of the quickest and longest ranged attacks in the game. He can also protect himself by throwing skulls, spitting out anti-air fireballs, and spinning in a split-kick move. His trademark skill is his defensive crouching stance, which can switch between either a low sweeping slash or unique jumping slash. Tam Tam's greatest flaw is slow speed, most apparent to players when he jumps, along with his lengthy animations, as they easily telegraph most of his special moves. Players who play Tam Tam should have a firm grasp of their opponent's moveset and use its flaws to their greatest advantage.

His moves are written in Nahuatl that was never officially translated by SNK. 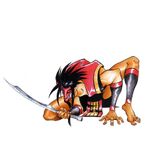 Tam Tam and Cham Cham in the Samurai Shodown RPG.

Retrieved from "https://snk.fandom.com/wiki/Tam_Tam?oldid=153565"
Community content is available under CC-BY-SA unless otherwise noted.