Sun Wukong (孫悟空), also read as Son Gokuu in Japanese on'yomi, is a character who originally hails from the popular Chinese folktale, Journey to the West. An alternate interpretation of him appears in the World Heroes series of fighting games as a playable character.

The monkey king, Son Gokuu is a tremendous warrior that loves adventure. He seeks more and more adventure anywhere he can go.

An easy-going young man. Gokuu has no knowledge of civilization as well.

Aside from martial arts, he fights with the "Mind Stick", a staff, with transformations, and with a gourd capable of sucking in the opponent. 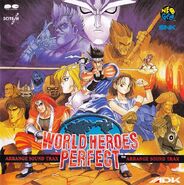 Retrieved from "https://snk.fandom.com/wiki/Son_Gokuu?oldid=145410"
Community content is available under CC-BY-SA unless otherwise noted.