Her sword, excavated from ruins

Original Sword Dancing Techniques + Kenjutsu
Sinclair (シンクレア, Shinkurea) is a video game character introduced in Art of Fighting 3. She acts as a type of sub boss for the game. She is voiced by Harumi Ikoma.

She is working with Wyler, pretending to encourage him in his experiments, but secretly wants him to stop them; whether she is there to assassinate him or not is unknown. She eventually confronts Wyler, apparently wanting to test the efficiency of the drug he took for herself. She doesn't divulge her personal reasons why, replying to Wyler "telling you won't make a difference". After his defeat, Sinclair leaves him to do as she pleases. It's notable to mention that Wyler doesn't revert to his childlike mental state as he does in other endings; the elixir's effects are still active.

Like Wyler, Sinclair doesn't have an ending sequence in English: completing the game only yields the staff roll. Both characters have an ending in the Japanese Neo Geo CD release.

Sinclair is a mystery to all -even Wyler- as she reveals little about herself.

Sinclair uses techniques that resemble north Indian swordsmanship. Her stance is one of the main postures in Kashmiri sqay. Unlike Wyler, she can be thrown, but cannot use throw moves herself. 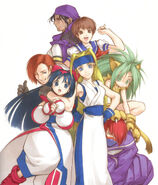