SNK Wiki
Register
Don't have an account?
Sign In
Advertisement
in: Characters, King of Fighters Characters, Male Characters,
and 16 more

He is voiced by Takashi Ōhara.

Shun'ei was designed to be a new hero who brings new impressions to players without adhering to the existing KOF series. In order to achieve this goal, they had a younger designer come up with the design instead of Eisuke Ogura. Originally Shun'ei was going to have a stereotypical Chinese design, but the developers dropped the idea in favor of making something cool instead.[1]

Nobuyuki Kuroki comments that it's a design that's meant to be more appealing to the female audience and it would be nice if this character was the reason they'd play the game. He also notes that the people who were involved in Rock Howard' design were also involved in Shun'ei's creation so players may see similarities between the two.[2] When discussing about the roster, Yasuyuki Oda mentions that Shun'ei and Meitenkun are closer to being Fatal Fury characters than KOF characters due to being Tung Fu Rue's students.[1]

In an interview before the games release, Oda felt that people are all bored with the headband wearing aggressive type of characters. And that those characters are so common now, so the team wanted to include a shy character who doesn't really show his emotions to add some variety.[3]

In KOF XV's Teaser Trailer (released in December 2020), creative director Eisuke Ogura explains the reason to Shun'ei's shy introduction in the franchise compared to the other protagonists is because the staff wasn't sure if he should be the new protagonist of the story, but they decided to focus more on the character from KOF XV onwards.[4]

Shun'ei is a nice and reasonable person due to Tung Fu Rue's kindly teachings. He fondly calls his master "Grandpa". He admits his cursed powers may endanger anyone near him and is worried about it. Due to his benevolent nature, he intends to continue his training to use his powers for good.

Shun'ei's power has a symbiotic relationship with Verse, Isla and an unknown blue creature.

Shun'ei makes use of a personal fighting style that involves telekinetic control of his energy fists, mixed in with control via Hakkyokuseiken via Tung Fu Rue's teachings. Most of his attacks are somewhat reminiscent to a personal form of Chinese boxing.

Names in Other Languages

The King of Fighters XIV artwork 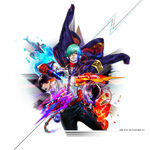 In promotional art of The King of Fighters XIV, with Iori and Kyo.

The King of Fighters XIV: Rock Howard's Back by Eisuke Ogura