Those who threaten nature

He can live without having to eat meat

He is the only Siberian Wolf in Kamui Kotan

Shikuru (シクルゥ) is Nakoruru's wolf companion introduced in Samurai Shodown III who acts as an exclusive helper to Nakoruru's Rasetsu/Bust form and eventually Rera. His name has no meaning and was chosen based on sound and character.

Shikuru started accompanying Nakoruru when her darker personality started to surface. Sharing sentiments with Rera, he is often found following her around.

Originally, he is portrayed to be one of Rimururu and Nakoruru's friends. In later games, he became more colder and ruthless than Nakoruru's other animal companion Mamahaha. He however remains loyal to his owner's cause.

Unlike other pets, Shikuru serves primarily as Nakoruru/Rera's battle mount. Shikuru is a necessity for several of his master's special moves, as having her travel on him is a great emphasis to mastering her form of gameplay. Whilst Nakoruru/Rera mounts him, the player can run faster and jump longer distances -at the sacrifice of a lower height. If their opponents attempt to attack, the player can quickly counter with Shikuru's rush attack, which may also launch Nakoruru/Rera after the blow for increased damage. Players may be handicapped, however, due to the heavy reliance put on mounting Shikuru. For instance, Nakoruru/Rera cannot mount him if he is too far away from her and when she is in the process of mounting him, she remains temporarily vulnerable to any attack. 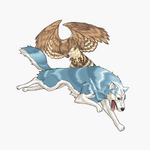 Samurai Shodown VI: artwork.
Add a photo to this gallery
Retrieved from "https://snk.fandom.com/wiki/Shikuru?oldid=132122"
Community content is available under CC-BY-SA unless otherwise noted.