June 6 (She doesn't remember the year)

A small shrine in a cave at Mount Osore, Mutsu Province, Japan

Servant of Yuga the Destroyer

She is a woman who was tailored to be Yuga's servant before her birth. Her identity and memory become fractured when she was brainwashed by Yuga in her adulthood. He engraves an enchanted snake tattoo on her back as a means to control her. She is told to find a man fit to become the perfect body for the Dark Lord's resurrection. Finding Haohmaru to be that man, she follows him for a chance to take him away to her master.[2] Her soul becomes freed after Haohmaru defeats Yuga.

During the year of Yuga's absence, she loses her memory of being Yuga's servant and lives on as a normal woman named Kanae. When Yuga resurrects itself a second time, it sends its new servant, Shadow Asura, to capture Shiki and regain her servitude. He succeeds in restoring her memories as Yuga's servant but the two unexpectedly fall in love. After the two Asuras defeat Yuga, she gives birth to Mikoto. She leaves her child with Nicotine Caffeine and Haohmaru as her servitude to Yuga made her feel unworthy of being a mother. It is unknown what occurred after this point, but it is strongly implied she died somewhere.

A sad woman in her heart, she never understood what it is like to be a normal woman. During her time with Yuga, she would give her body and soul to her master's wishes.

Her fighting style is focused in her twin katanas. She uses some unorthodox slashes and some kicks as well. Special moves from her Bust version are integrated into her Slash move set in her later, non-series appearances.

Her swords are said to be crafted by the heart of the demon world and given to her by Yuga. In the past, several demons -including Mizuki- tried to get their hands on it. 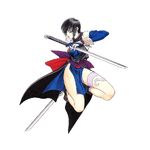