Throw attacks (mix with Orochi Lightning (KOF 2002, KOF Neowave and NGBC))
Shermie (シェルミー) is a character in The King of Fighters series series who is a member of the Orochi Team (temporarily under disguised team name, "New Faces Team" in KOF '97).[2][3] She is one of the Four Heavenly Kings of Orochi who is the dark counterpart to Benimaru Nikaido.

Shermie and her teammates were created to offset the remaining top three characters. [5] It's stated on her KOF 10th anniversary profile that she was based on the character Fujiko Mine from the manga/anime series Lupin the Third. The developer states that the design for Shermie was easily decided on, given that her long bangs never revealed her eyes. They would go onto calling her Tesse from Waku Waku 7 at one time.[6]

Shermie is a very outgoing and friendly girl. However, like some people, she has reservations about society at large, as she considers them stupid, when it crosses beyond her interests and profession. She doesn't seem to take battles and fighting too seriously, often dancing around and picking up her cellphone during battle. Shermie blows a kiss towards her opponent before the battle begins. She only seems to do this when fighting against a male character that she finds attractive. She seems to dislike noisy people, as seen in her special intro with Brian Battler in KOF '98 UM. Shermie has an affinity for hamsters, and owns two of them as pets, a male and female pair named Achu (あちゅ) and Ururi (うるり).

Her long bangs make it difficult to see her eyes but underneath them lies a glare with strong murderous intent.[6] Even though she considers human society stupid, it's been noted that she enjoys her lifestyle working as a fashion designer.[7]

In her other (mostly non-canonical) appearances, she seems to be aware of her own Orochi heritage, which sometimes reflects in her quotes. However, while she's clearly not antagonistic as with her Orochi form, she can be just as murderous, manipulative and ruthless if provoked, especially if faced with particular foes, most notably perverted men like Kukri, and to a lesser extent, Brian Battler.

When Shermie was revived, her Orochi heritage was retained as well. While they take their roles as Heavenly Kings seriously even in their normal forms, this time, it isn't an outstanding priority.

When not using her Orochi powers, Shermie relies on grappling as her combat style. She is also quite agile and some of her moves represent gymnastics. She performs a variety of body slams, most involving acrobatic moves, some counter throws and a few face-sitting throws. Her grappling gameplay is further improved in KOF '98 and further expanded in KOF 2002. In Neo Geo Battle Coliseum, Shermie uses a few of her Orochi power.

The King of Fighters 98 Artwork

The King of Fighters 2000 artwork

Shermie in the first KOF pachinko 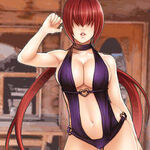 Shermie from The King of Fighters All Star