Shadow Asura (反面のアスラ, Hanmen no Asura) is the Rasetsu/Bust form of Asura. He is considered to be a separate character from his other half as he plays a different role in the series.

He's occasionally depicted having four white wings in various appearances (though they are never shown in actual gameplay). Shadow Asura is also symbolized by the same stylized eye shared among Yuga and its servants.

He is voiced by Kazuya Ichijo.

Shadow Asura is a clone of Asura created by Yuga using a forbidden technique. For some time during the plot of Samurai Shodown 64, this clone was completely loyal to Yuga but wavered when he realizes his affections for Shiki. He comes to love Shiki and wants to save her from her former master. Subsequently, he and his original band together and kill Yuga. However, upon Yuga's defeat, he begins to deteriorate because Yuga's magic is what kept him alive. For the sake of his clone, the two Asuras merge together and turn into one unique being. Before he merges with his original, Shiki gives birth to their child.

It's later mentioned in Warriors Rage that he was the "true" Asura, as he had the emotions and thoughts of the original. He is supreme ruler of the Underworld and has seven kings in his service.

Shadow Asura was once as loyal as any of Yuga's servants until he meets Shiki. Emotionally conflicted, he eventually chooses his love for Shiki over his duties.

Shadow Asura relies on the dark magic given to him by his master, sharing of some of Yuga's moves. He is a close to mid-ranged fighter with attacks that are slightly quicker than his original counterpart.

His attacks are named after various Kabbalistic angels, spelled in reverse. 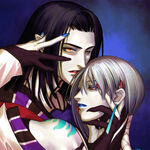