He is voiced by the late Hidetoshi Nakamura and Glenn Haig. His official name is The Secret Agent.

Seth was created along with Vanessa, though Seth became the visual model for her. Developers wished to have a character with "the powerful image of a big, dark, middle-aged man with a Mohawk haircut". Seth's prototype name was "Dick". [1] Ureshino explains that he was added to the KOF: Maximum Impact series over other agent characters due to his professional and focused attitude.

He was ordered by his superior Ling to enter the King of Fighters tournament in order to capture the Flying Brigands leader, Ron. To do this, he arranges to team with Benimaru Nikaido, Shingo Yabuki and Lin. During the tournament, he learns that Ling is really Zero in disguise and that Ron had joined with NESTS. He continues to investigate Ron's activities as the series progresses, presumably to prevent him from becoming too powerful. He was also asked to attend Heidern's conference with the Agent Team in The King of Fighters XI.

In the Maximum Impact series, he is often blamed for causing Fate's death. Seth gave him information about Duke at Fate's request, which eventually motivated the latter to stand against the crime lord. In Alba and Soiree's eyes, the agent gave Fate false information and set him up for his death. Although they learn the truth behind their adopted father's death later on, the Meira brothers often target Seth as an act of vengeance.

Seth is a good man engaging in a dangerous line of work. Methodical and straight to the point, he completes his missions with the ease of a true professional. He will faithfully obey any orders from his superiors and protect his family at all costs. Even then, Seth can at times be lighthearted enough to fake a finishing blow towards his fallen foes.

As Seth himself says, his fighting style is mostly made up self-defensive techniques.

Uniquely enough, his moves are all written in kanji with a unique romaji format that are all in English uppercase letters, along with his moves being named after a solar motif (the sun, moon and rain).

The King of Fighters 2000 Promotional Art by Kalkin

Seth artwork from King of Fighters 2000. 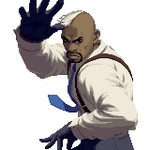 Seth artwork from King of Fighters 2001.

Seth artwork from King of Fighters 2002.

The King of Fighters 2002 Festival: Art by Falcoon 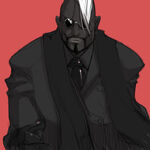 The King of Fighters 2001 (Lower) ～THE GODS THEMSELVES～: Illustration by Hiroaki.

The King of Fighters 2000: Team Story

The King of Fighters 2000: Opening

Vanessa with Heidern, Blue Mary, Ramon and Seth in The King of Fighters XIII

Vanessa, Mary, Ramon and Seth reporting back to Heidern in The King of Fighters XIII

Seth and Vanessa, by Falcoon
Add a photo to this gallery

Retrieved from "https://snk.fandom.com/wiki/Seth?oldid=143388"
Community content is available under CC-BY-SA unless otherwise noted.