It was designed as a conversion from Samurai Shodown 64: Warriors Rage, and almost all of its story events, endings and cutscenes are derived from its arcade cousin. It turned out to be a surprisingly robust rendition, with almost all characters from SS64: Warriors Rage being included (the sole exception being Hanma Yagyu). It also re-added two series favorites who were not in the arcade, Charlotte and Jubei Yagyu.

The game is avaible as a pre-purchase bonus for the Nintendo Switch version of the new Samurai Shodown.[1] It's the first time in 20 years that a title from the Neo Geo Pocket Color game library has been available on another console.

An exclusive and limited physical version has been released by Pix'n Love Games as part of the Samurai Shodown Switch - Shockbox Gold Edition.[2]

Since it follows the same story as Samurai Shodown 64: Warriors Rage, the setup is the same:

In an unknown land an eerie disturbance disrupts the sky, leading a dark mass to the land.

It is the ultimate evil-it is the reincarnation of Yuga the Destroyer.

The objective of this being who once more alights to earth is the unification of this world and the Netherworld using the hermaphrodite male and female-that is, the construction of a utopia to become the foundation for the resurrection of the Dark God.

As he resumes his search for the hermaphrodites, those turned into puppets by Yuga's magic unleash their carnage to gather the sacrifices necessary for the ritual of utopian construction.

These puppets then employ various means to increase the dead and provide sacrifices. Some, for example, become leaders of the Shogunate to carry out ruthless policies, some became common murderers, and still others deliberately incite revolt against the government.

Through the influence of the devilish reincarnation, outbreaks of famine and plagues further increase the dead, providing the evil with yet more strength and delight.

The mountain of dead gathered by these means is subsequently heaped up on the altar of the Netherworld and fashioned into two pillars in which the hermaphroditic male and female are to be subsequently imprisoned.

At this time one man returns to the Netherworld. The name of this warrior who stands directly before these literal pillars of the dead in the darkness is Asura. Master of magic, he is the dark swordsman appearing in this realm to wreak his revenge on Yuga.

Regardless, his enemy steadily proceeds with the construction of his utopia.

The curtain now rises on this drama of revenge that will engulf both our world and the land of the dead.

SS!2, as it is abbreviated, kept very true to its arcade origins, retaining most of the gameplay elements of its source game, albeit modified to work within a 2D setting. SNK had, by this time, had more time to grow comfortable with its handheld hardware, so the game is considerably more refined than the original Samurai Shodown!.

The Slash and Bust modes for each character were retained, with all of the moves from the arcade kept intact (except for Yuga, who had a third form in the arcade, which was mostly excised). This was particularly impressive, given the original's sizable movelist, and the fact that the NGPC only had two buttons instead of four. The original "CD combo," first introduced in Samurai Shodown IV, was also retained, but simplified and streamlined from its origins.

Being a game on a handheld platform, versus play was not a primary focus, so SNK added in a "Collection" mode, to extend the game's longevity. This came in the form of virtual cards, which could be traded with other people who owned the game, by linking up systems. There were eight per character (four for Slash, four for Bust). These cards served two purposes:

Samurai Shodown! 2 was enthusiastically devoured by fans of the series, both on its own merits, and because it was the first new widely-available SS game in the U.S. since Samurai Shodown IV. Its exact sales numbers are unknown, but it was one of the more popular games on the Neo Geo Pocket Color. Some fans have described it as "the best SS since Samurai Shodown II." 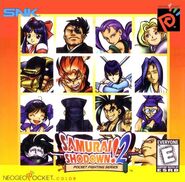 Nintendo Switch box art
Add a photo to this gallery

Retrieved from "https://snk.fandom.com/wiki/Samurai_Shodown!_2?oldid=142483"
Community content is available under CC-BY-SA unless otherwise noted.