Leader of the Kusanagi clan

Pride of the Kusanagi family, his wife

Fishing, oyaji-gari-gari (beating up people who beat up their elders)

Introduced in The King of Fighters '94, Saisyu Kusanagi (Kyo Kusanagi's father) is the current patriarch of the Kusanagi bloodline and master of the sacred flame. Unlike his son, he dons an old fashioned style Kusanagi clan outfit and utilizes more basic traditional martial arts techniques. In 1994, Saisyu embarked on a quest to challenge fighters from around the world. Kyo and his teammates (Benimaru Nikaido and Goro Daimon) learn of his demise just before the final match in KOF '94. Saisyu apparently challenged Rugal Bernstein and is beaten badly, it is implied that he allegedly later succumbed to the injuries he sustained before the finals.

However in The King of Fighters '95 it is eventually revealed that Kusanagi survived, was then brainwashed by Rugal's secretary Vice in order to compete as a mid-boss in the semi-final round. He is supposedly defeated by his son Kyo and his teammates. Upon his second defeat, Saisyu goes in to self-exile, only to resurface again in (a non-canon event) The King of Fighters '98.

In The King of Fighters 2001, he appears before a distraught Shingo Yabuki (Kyo's student) and tutors him in the traditional methods of the Kusanagi Martial-Arts style, as seen in the Japan Team's ending.

Saisyu had originally intended to meet each member of Japan Team personally and check to see if their strength declined before making this request. However, at a glance, he was convinced that he had worried for nothing. He hands them the invitation and requests them to enter so they can help the newcomers.. Saisyu confirms that with Tung on the team, the students will make it to the finals. He then informs them about a new threat which will cause untold chaos.[2]

Saisyu Kusanagi is simply an older, more mellow version of his son Kyo. Regardless, he is just as arrogant and cocky as Kyo; like father, like son. This is quite evident based upon his attitude and body language during several win-poses; where he either laughs abrputly after winning a match (i.e. not taking the bout seriously), nonchalantly scratches his beard or generally seems uninvolved...or bored by rubbing his abdominal muscles in a laxidasical show of bravado.

The only characters that seem to make him even remotely contrary are Rugal (who defeated him back in KOF '94) and seemingly to a lesser extent Kyo (his savior, who subsquently also defeated him a year later in KOF '95). Ironically enough he seems to harbor no indication of resentment or ill-will in the slightest towards Vice (one of Rugal's secretaries; a dominatrix who indulges in sadism), she brainwashed him in KOF '95. Vice visibly holds Saisyu with contempt during their pre-fight scene due to his strong resistance giving her notable difficulty, by pointing at him and spitting. However, he assumes his fighting stance and never acknowledges her insulting behavior.

Saisyu is a master of the Kusanagi martial arts, an ancient empty handed system that incorporates fire based attacks and kenpō. He uses the basic form of the Kusanagi style, his arsenal is simple yet effective, akin to Kyo's original take on the style prior to '96 (as Saisyu still uses the Yami Barai); oddly enough, Saisyu's original technique, Tsumugari (All-Eyes Reaper), makes use of Kyo's Aragami technique as its initial blow. Likewise, in KOF XIV, Kyo himself likely has his Yaegaki Climax DM follow a similar motion to the SDM Tsumugari in its vein (with the former actually being a Reverse Method version of Tsumugari).

Most of Shingo's (Kyo's "apprentice") animations are shared with Saisyu's, as both use the more basic principles of the Kusanagi style. Saisyu even tutors Shingo himself at some point to further hone the style.

The King of Fighters '95 artwork

The King of Fighters Neowave artwork 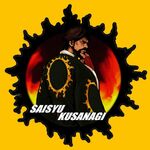 Retrieved from "https://snk.fandom.com/wiki/Saisyu_Kusanagi?oldid=142636"
Community content is available under CC-BY-SA unless otherwise noted.