Leader of "Those from the Past"

Having his plans disrupted

Saiki () is the main antagonist and sub-boss of The King of Fighters XIII, as well as the leader of Those from the Past. His official nickname is The One who Rules Time (をべるもの). Although his Awakened form is unplayable, his Normal form is included as an unlockable character in the console versions.

Extremely confident in his own strengths and abilities, Saiki believes himself to be a supreme entity of power. He talks in the same flamboyant manner as Ash, openly stating whatever lack of interest he feels. Saiki is rather malevolent and doesn't feel the slightest speck of remorse for the carnage he causes. He is very arrogant, and he takes pride in his "ascendant" status as an ancient entity and as such, has a "God complex" that is the primary source of his arrogant behavior, further reflected even in his fighting style. He often talks down on the fighters that face him, quipping sarcastic and rude dialogue towards his opponent (a trait that his modern descendant seems to have inherited) and often pointing out that he/she is a human, something Saiki considers as "worse than trash".

As a boss, he focuses on immobilizing the opponent using his Tokoyami no Fune (Ship of Everlasting Darkness) at both long and close range, followed by either the Kyoryuu no Ori (Distant Dragon's Sediment) - a 4 hit grapple - or his Super Special Move Kasumi (Divine Flock), dealing a considerable amount of damage. 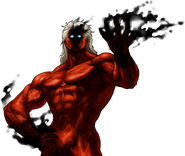