SNK vs. Capcom: The Match of the Millennium (頂上決戦 最強ファイターズ SNK VS. CAPCOM , Final Great Battle of the Strongest Fighters: SNK vs. Capcom?) is a fighting game for the Neo Geo Pocket Color. It features a total of 26 characters from SNK and Capcom, eight of which are unlockable.

Play options includes 2-fighter tag teams, 3-fighter queue teams, and of course, fighting solo. After that, the player can choose either a Capcom-style level meter, an SNK-style charge meter, or a 'neutral' meter that enhances super attacks if full. Every character also has their own rival, whom they will fight at the fourth stage. The last two stages have the player's selected character fighting the tag team of Geese and Bison, then, depending what the side opposite to their character's is, Orochi Iori or Evil Ryu.

As a side feature, there is Olympic mode, where the player can play themed minigames such as blasting Mars aliens FPS-style (lifted from the final boss of Metal Slug 2) or helping Arthur from Ghosts 'n Goblins hop pits to snatch up treasure, as well as there being time-attack, first strike, and survival events. The player's performance in these games earns them special vs. points which they can use to unlock a special attack for each character.

The Match of the Millennium is capable of linking with such other games as the Card Fighters series and even the Dreamcast version of Capcom vs SNK, but the only purpose this serves is data transfer. The Japanese version could also transfer data to the Dreamcast port of The King of Fighters '98 for character points.

The use of both companies' material is quite extensive, from every character having their theme playing (not always from the first games they appeared in), to the featuring of stages from both universes. There is also interesting screens shown when this game is used in a monochrome Neo Geo Pocket, with such things as Alex and K' staring at each other, Shermie dressed up as Morrigan (to Yashiro and Chris' awe), Chun-Li doing her taunt pose while Li Xiangfei plays a Neo Geo Pocket, and Lilith and Kaede playing Neo Geo Pocket together. 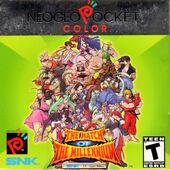 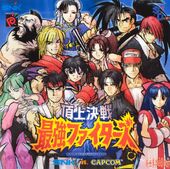 Soundtrack album cover
Add a photo to this gallery

Retrieved from "https://snk.fandom.com/wiki/SNK_vs._Capcom:_The_Match_of_the_Millennium?oldid=140391"
Community content is available under CC-BY-SA unless otherwise noted.