The main illustrations were done by Eisuke Ogura.

Kukri's obsession for women caused him to create a pocket dimension where women fighters must survive in his universe and join forces and slug it out with other women, genuine and otherwise...

The story takes place between the events of fourteenth and fifteenth King of Fighters tournaments, most of the female fighters, including few of them who aren't present in the previous tournament (such as Jeanne D'Arc and the revived Shermie) suddenly fall unconscious. Upon waking, they find themselves in a strange mansion, along some male fighters who have been changed into women. The fighters attempt to battle their way out, but are confronted by the mastermind, Kukri, who reveals he has trapped them in his castle in a pocket dimension and they must defeat him to return home.

SNK Heroines: Tag Team Frenzy is a 2-on-2 fighting game and can have up to four players clashing in either local play or online.

Utilizing the Spirit Gauge, players can activate Special Moves with a single button, and make use of special items to change the tide of battle. When the Spirit Gauge is low, attacks will be weaker, so players can swap between characters. When enough health has been chipped away from an opponent and their Life Gauge is red, players can use their Dream Finish technique to win the match. It also has universal Air Dash and Jump Cancel. However, it lacks of Crouching button and its attacks.

SNK Heroines: Tag Team Frenzy allows spectating of other battles online, and allows viewers to wage on who they think will win using in-game points. Winnings can be used to buy voice clips and over 140 accessories in an all-new costume system, to customize heroines. Each heroine has three base costume choices that can be further accessorized and four different voice sets. Accessories include everything from hats to wings. While these costumes can be used in battles, players can also have their heroines pose for photoshoot with special backgrounds and stamps.

Note: In the Japanese PlayStation 4 & PlayStation 5 version, the Buttons used for Confirm and Cancel are reversed.

With exception of Terry Bogard (who was turned into a woman by Kukri, boss of the game), Shermie and the DLC characters, all the original character cast is composed of female characters from KOF XIV. All the voice cast who worked in KOF series appears in this game.

The team decided to use SNK female characters since they were popular worldwide.[4] The basic idea was to create a spiritual successor to SNK Gals' Fighters,[5] while, at the same time, the team tried to steer away from making a rehash of it but a completely different and new game within the concept of using female fighters.[2]

The main objective of the game is make it possible to laugh when playing it, whether the player wins or loses, similar to a party game or professional wrestling.[6] Oda explained that the idea is that not only players, but also spectators can enjoy the battle with its comical looks, which contrast with gauge management and rules.[6] The target audience was aimed at both newcomers, with the simple controls, and experienced games, with the mind games involved.[4] The team focused its efforts into creating a fun atmosphere in the game so that SNK fans look at that side of things.[7]

For the selected female characters, popular ones were selected and characters that the team wanted to make more popular, as well as few special guests.[6] According to Oda, he would've liked to add Cathy from Top Hunter: Roddy & Cathy, and the team was lucky to be able to add Jeanne D'Arc from the World Heroes series.[6] Terry Bogard's female version was the very first thing decided during the development of the game as his design would allow his gender bent version to be easily recognizable.[5]

A customization element, with outfits and accessories, was added to the game as Oda and his team thought that this system would be enjoyed more in this type of game than in a The King of Fighters title.[4] This also allows to take pictures to share on social media and so on.[8] An uncommon trait for SNK games is the two vs. two battle system.[8]

As part of the effort to make the game more accessible for all kinds of players, the Dream Finish mechanics was tailored specifically for those who aren't good at combos, and this was important for the development team since it allows people who aren't particularly great at fighting games to enjoy the game.[2] The game still requires practice and to learn how to play, but the Dream Finish system makes it more welcoming.[2]

Since the game was developed specifically for consoles, the team focused on easy to use controls, so that when pressing a button and the analog stick in a direction, a special attack is performed, so the focus of the players should be on SP management and on how to use items, making a kind of complexity that differs from other fighting games.[7]

The gameplay was designed to be completely different from the one of The King of Fighters XIV due to its distinctive features. In order to promote the game outside Japan, SNK made a partnership with NIS America to gather attention in the West. The sexualization of female characters was made on purpose, although Oda stated that characters like Mai Shiranui have received this reaction in many other games. Nevertheless, the team worked in order to make member from the cast retain their original characterization despite the change of looks. Due to negative feedback from BlazBlue: Cross Tag Battle's use of downloadable content, the company intends to avoid having these types of marketing for the released game that will be released on stores.

The game is similar to a previous SNK title, SNK Gals' Fighters (which co-developed with Paon DP, the current rights owner of 1994 Data East's Neo Geo sports game Windjammers), which used only female characters with the exception of the male crossdressing fighter Iori Yagami as "Miss X". The SNK staff received feedback from many fans who wanted Miss X within the game, but could not confirm whether Miss X would make an appearance; Miss X was later announced as downloadable content. SNK also stated one of the playable characters would surprise the fans. Producer Alan Costa stated the team is confident in how the game will be localized for Westerns following issues with the localization of Ys VIII: Lacrimosa of Dana. As part of the promotional collaboration with Arika and Square Enix (as well as Examu which having developed Samurai Shodown V and Samurai Shodown V Special for SNK), they allowed SNK to add Arika's fighting series character Skullomania (in his female form as Terry and counting Miss X) and Million Arthur’s character Thief Arthur, in exchange of allowing them add original male Terry as a DLC in Arika’s Fighting EX Layer and Miss X’s original male identity Iori Yagami in Square Enix’s licensed fighting game by Examu, Million Arthur: Arcana Blood, respectively.

Some themes exclusive to the gallery mode are references to the characters' old themes in SNK past games (or original themes). Below, the list:

Beside that, the DLC crossover characters have musical themes from their original games (or franchises). The list can be seen below:

SNK Heroines Tag Team Frenzy received "mixed or average" reviews on Metacritic holding a metascore of 60/100 on both PS4[9] & Nintendo Switch.[10] Some people criticized the game because of being a "Dead or Alive-esque" fan service game, while other criticized the game for being called "SNK Heroines" and feature ONLY characters who were featured in The King of Fighters XIV, nicknaming the game as "KOF Heroines".

Mikhail Madnani from God Is a Geek rated the game a 7/10, praising its "unique" gameplay and competent online. Miguel Moran of The Sixth Axis awarded it a score of 8/10 and likewise praised the games "wildly different" battle system that "creates a whole new style of mind-games and combat-planning". Ben MacRae from outlet Crash Landed rated the title a 3/5, praising the art and animation but criticized the "empty stage design" and "lack of unlockables". Chris DeVisser from PlayStation Universe awarded the title 4/10, critical of the "simple combat system" and lauding it a "weak entry" in the SNK fighting game history.

Artwork of all initial characters, by Ogura 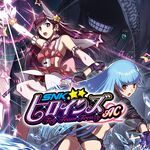 Promotional trailers of the game.

SNK HEROINES Tag Team Frenzy - Who will be the Belle of the Brawl? (Nintendo Switch, PS4

Reveal Trailers of some characters.

Gameplay Trailers of the regular characters.

Reveal Trailers of the DLC characters.