Having an evil heart

Has no likes or dislikes regarding food

None in particular, he's good at everything

People who stop his plans

Rugal Bernstein (ルガール・バーンシュタイン, Rugāru Bānshutain) is a recurring boss in SNK's The King of Fighters fighting game series, and is often considered one of the most difficult bosses in the entire series.

On their anniversary website, SNK has stated that Rugal was originally based on the concept of the "mightiest and most evil boss character ever".[2] Like Goenitz and Heidern, his name comes from the anime, Space Battleship Yamato. Toyohisa Tanabe states that his fighting style was created to emphasize Rugal's strength as the series's first boss character. He also comments "going a bit overboard" with Genocide Cutter's damage ratio in The King of Fighters '94.

Their first idea for Rugal's character was that he could learn any move that he saw just once. The developer notes that he was supposed to be "the cheapest bastard ever", but they dropped the idea because they didn’t have enough memory to execute it.[3]

Feared throughout the political and fighting world, Rugal was an influential arms dealer who operated aboard his aircraft carrier Black Noah. To those who would oppose him, he would defeat them and later preserve their bodies in liquid metal to add to his grisly trophy room. He used to work with his younger brother, but they separated over conflicting interests. When Rugal was about 25 years old, an 18 year old Goenitz took out his eye with one strike and gave him a small portion of Orochi's power for surviving the attack. Since then, he has a bionic eye to replace the one he lost.

Sometime in 1986, Rugal wanted to demonstrate his power in a base at Brazil and murdered everyone he found inside. The sole survivor of the fifty man massacre was Heidern, who lost his right eye during the attack. At the time, he was too displeased with his victim to add him to his "collection" so he deprived the man of his wife and child as compensation. It's speculated that he later regrets this act, but it is never clearly stated.

Before 1994, he recruited two secretaries: Mature and Vice. With their help, Rugal organized a King of Fighters tournament, in order to find worthy opponents. During the invitation phase, Saisyu Kusanagi came to the Black Noah and challenged Rugal. Although Rugal won the battle, he did not subject him to his metal bath. When Saisyu's son, Kyo Kusanagi, arrived with his teammates, he defeated Rugal. Unwilling to accept defeat, Rugal blew up his ship.

Rugal was believed dead, but he used the Orochi power to survive. Replacing his destroyed right forearm with cybernetics, Rugal revived Saisyu, brainwashed him with the help of Vice, and sent out invitations the following year for another King of Fighters tournament. Rugal used an abandoned missile silo as his base in 1995, and abducted the winning team (again, Kyo's team) to fight Saisyu, and then himself. Despite using the Orochi power and becoming Omega Rugal, Kyo's team defeated him. Again beaten, Rugal tried to use more of the Orochi power, but it consumed him. As his body disintegrated, he saw Iori Yagami, who told him that only those "of the bloodline" could control Orochi's power.

In 'Capcom vs. SNK 2, depending on the player's actions, he is one of the final bosses of the game. If seen alone, Rugal gives the player a chance to fight him before a real fighter arrives. Upon defeat, Rugal appears to be disappointed until Akuma arrives at Osaka's castle tower. After Rugal "allows [the player] to leave", the battle begins leaving the outcome undetermined.

Rugal is a cruel and powerful man who will kill anyone who stands in his way. He sees absolutely no value in human life, to the point where he proudly displays the metal-encased corpses of worthy opponents he has killed in battle as trophies. He will even go so far as to kill people simply to spite others (such as when he slaughtered Heidern's family simply because he found Heidern to be a disappointment). Unlike most other KOF villains, Rugal has a sadistic sense of humor about what he does. Many of his winquotes are snarky insults toward his opponents, and he often sees the act of taking human life to be more of a pastime.

Much like Igniz, he believes himself to be a human god. Unlike Igniz, however, he hardly takes his "godhood" seriously. It could be said that Rugal possesses the greatest proverbial swagger of all The King of Fighters boss characters. His "godhood" is also a motif for moves like his God Press attack.

Due to his arrogant nature, Rugal has also been shown to be an incredibly sore loser. Refusing to accept defeat at the hands of his enemies, he'll instead trigger the self-destruct mechanism of whatever the base he's in with the intention of taking his opponents down with it, but ends up being the only one caught in the explosion instead. While this first appears in KOF '94, it happens again in KOF '98 and KOF 2002. This trait even carries over to Metal Slug Defense, where upon his defeat, he'll get back up, pull out a detonator and blow himself up.

There is no information regarding his outlook towards his immediate family, but it can be safely assumed he is somewhat distant from it. Rose inherits some of Rugal's nasty attitude, and is just as much of a sore loser as her father, while Adelheid presumably inherits his combat prowess, and unlike his father, has far better sportsmanship.

His fighting style is an amalgam of various arts, including Hakkyokuseiken and House of Strolheim, the styles used by Geese Howard and Wolfgang Krauser. He has adapted several moves from each character, such as Geese's Reppuuken and Krauser's Kaiser Wave (the latter converted into a special move for Rugal's case). Oddly enough, so far only Geese and Krauser's techniques are used very frequently by him (the two men are even related out of ironic coincidence) and he even clashes paths with them at some point; both him and Krauser even clash their Kaiser Waves together in their '98 UM special intro.

However, he also uses his own techniques such as the Genocide Cutter. Rugal was originally supposed to have access to every special move in the game during The King of Fighters '94, but idea was scrapped because it put a terrible strain on the programming, and thus he appeared as a combination of the two Fatal Fury bosses instead. He also has a projectile reflector known as Dark Barrier/Dark Crystal Reflector which is very similar to Athena Asamiya's Psycho Reflector, this move along with him copying the Reppuuken and Kaiser Wave being a possible remainder of the original idea.

Originally in KOF '94, Rugal's first round form in his suit (which returns in the Capcom vs. SNK games) lacked special moves, and only one of his normals did chip damage. His second round form with his jacket removed (used for his subsequent KOF appearances) gives him new normals and his signature special move set, though he does not have a legitimate Desperation Move. Both versions of Rugal act like so even when using a code to play as him, as he'll act just like his boss version and when he loses his first round, the background will distort to red like his boss battle. This is also the game along with the sequel to have his signature Genocide Cutter take out over half a character's health if both hits connect; however, KOF 98' onwards considerably nerfs the attack via removing its invincibility (or at least head-level invincibility only) which made it a much weaker anti-air in most titles.

In KOF '94: Rebout (as well as by proxy KOF '95 for his Omega form), Rugal gains a legitimate DM, which instead becomes his God Press (this was one of his special moves in the original '94). As of '95, his initial DM has always been his Gigantic Pressure, the stronger version of his God Press (which Mature's Heaven's Gate is modeled after). His '98, '98 UM and CvS incarnations so far are the most notably balanced versions of him, though to compensate Rugal often lacks cancels the most compared to other characters, making him a character that's difficult to perform combos with in trade of having a variety of punishing options. However, Rugal also possesses a large frame and notable lag on his attacks should he use them haphazardly.

His Dead End Screamer in '98, due to its notable animation involving Rugal stomp on his opponent and drilling them to the ground, is often both a testament to his brutal fighting style, and the source of memetic jokes involving Rugal (often dubbing it as the "Rugalspin"). Along with this, Rugal shares a darkness and evil motif for his moves, through techniques such as Genocide Cutter, Genocide Heaven, Dark Barrier, and Dark Smash.

In Capcom vs. SNK 2, the word "Genocide" was censored out of his movelist, so his trademark Genocide Cutter became the "Destroyer Cutter", and a super version of it appearing in this Vs. series, Genocide Heaven, was renamed "Total Annihilation". In the Japanese version, the word "Genocide" wasn't actually censored out, thus when Genocide Cutter is used, he'll yell out the attack's name (he remains silent when using it in the international versions).

The King of Fighters '94: Concept art

The King of Fighters '94 artwork. 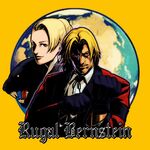 Rugal Bernstein, Rodem, and Mature in The King of Fighters '94 Rebout.

Retrieved from "https://snk.fandom.com/wiki/Rugal_Bernstein?oldid=143246"
Community content is available under CC-BY-SA unless otherwise noted.