The remnants of the Hizoku

Magic Mauling Evisceration Boxing, Self-Styled Exploding Fistwork
Ron (Japanese: , Ron; Chinese: 龍, Lóng; both literally mean "Dragon") was first introduced as a pivotal sub-plot character in The King of Fighters 2000, but has yet to be playable in the series.

He is voiced by Takaya Kuroda.

An ambitious man, Ron is the type of person who will use anything for his personal gain. He pretended to be manipulated by NESTS and was using the syndicate to his own advantage the whole time.

Not much is known about Ron's fighting style. It may be based on Kung Fu. 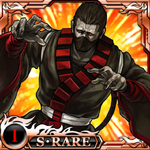