Ripper and Hopper are characters in the Fatal Fury series. Hopper (ホッパー), the one with hair, is voiced by Nobutoshi Canna and Jason Gray-Stanford in English for the anime. Ripper (リッパー) is voiced by Michael Dobson in English as well.

Ripper and Hopper are the personal bodyguards of Geese Howard, alongside Billy Kane. They are in charge of Geese's protection when out of the Geese Tower. Hopper also supplied Hwa Jai with his power drink supplement and Billy with extra staves during their matches in the original Fatal Fury. Ripper was still working for Geese as late as KoF '96, but his fate after that is unknown.

KoF XIV reveal both of them to be still working for Geese. At the end of tournament, they're in charge of keeping an eye on the Ikari Warriors.

As a side note, Ripper likes to collect knives while Hopper collects guns. They seem to have some degree of martial art skill, but they are the men beaten by Yamazaki during the Fatal Fury 3 opening.

The King of Fighters '96 ～Rumbling on the city～: Illustration by Yuka Ichinoshita. 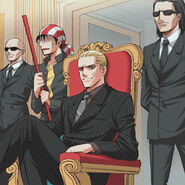 Bad ending with Geese in eighth Days of Memories

Falcoon Art
Add a photo to this gallery

Retrieved from "https://snk.fandom.com/wiki/Ripper_and_Hopper?oldid=142739"
Community content is available under CC-BY-SA unless otherwise noted.