Arcade, Neo Geo AES, Neo Geo CD, Nintendo Switch, PlayStation 4, Xbox One
Riding Hero (ライディングヒーロー) is an arcade motorcycle racing video game developed and released by SNK. Originally developed for the Neo Geo hardware family, it has since been released in other platforms. The game is notable for being the directorial debut of Hiroshi Matsumoto. It was the first Neo Geo game that used the multi-link function that allowed two systems to be connected for LAN play. The promotional art was drawn by Shinkiro.

Riding Hero has three modes: W.G.P Mode, Story Mode and Multi-Play. The first two are for single player. W.G.P Mode (World Grand Prix Mode) has the player compete against CPU opponents after choosing a rider and a motorcycle with the objective of racing in ten circuits in order to win the Grand Prix. Multi-Play allows two players in linked systems to compete against each other.

While several SNK collections had been released over the years, it wasn't until Hamster picked up the rights of the game that Riding Hero was re-released in its original arcade version as part of Hamster's ACA NeoGeo line on 2018-06-07 for Nintendo Switch, PlayStation 4 and Xbox One. For unknown reasons, the North American PS4 version was released months later on 2019-02-05. 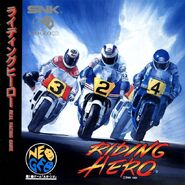