The Pao Pao Cafe chain (now at 3 locations), his buddies

People who fight at his cafe

Originally from Brazil, Richard is a Capoeira master who used his skills to entertain the nightclub crowds. While he had fun entertaining the masses and loved the recognition for it, he felt he had to move on. Moving to the United States, Richard made his home in Southtown. It was here that he opened the Pao Pao Café, a nightclub reminiscent of those of his native Brazil. Unlike the bars in Southtown, Richard would not tolerate any discord caused by criminals and thugs in his club, literally kicking them out if they do.

When Geese Howard held the King of Fighters tournament, Richard entered to promote the Pao Pao Café. While he accomplished this goal and beat several fighters in the process, he was beaten by the Lonely Wolves (the Bogard brothers, Terry and Andy, and Muay Thai champ Joe Higashi). Richard was a good sport about losing and the Pao Pao Café became Southtown's ideal nightclub spot. The club also became a hot spot among fighters where they can spar against one another or just hang out. This was evident when another King of Fighters tournament was held by Wolfgang Krauser and all the fights were shown live in the café. The profits from that venture were so high that, combined with the club's ongoing popularity, Richard had enough money to build a second Pao Pao Café in Southtown.

During the grand opening of Pao Pao Café 2, with his Capoeira student, Bob Wilson, acting as the manager, the place was wrecked by the Jin twins, Chonshu and Chonrei. As Bob went after the Jin twins for what they had done, Richard stayed to rebuild the second Pao Pao. After he rebuilds the club, he gives it to Bob, who Richard felt was worthy of full ownership because of his impressive skills. Richard now has devoted his time to entertain the masses and garner attention for both Pao Pao Cafés. He has made many friends in the fighting community ever since. While Bob usually does the fighting, Richard will throw down once more if challenged.

Richard loves to see what he's accomplished, and the Pao Pao Café chain is what he loves the most. Richard is a very outgoing person in his spare time. When at work, he takes it very seriously.

The most disappointing and embarrassing parts of Richard, is that he ends up into a running gag in mostly Women Fighters endings since The King of Fighters XIII onwards, where he (later alongside Bob) unable to control over almost every loyal female KOF veterans who are also his cafe’s loyal customer to control themselves from turning into drunken party girls who ended up causing a bar fight within his cafe.

Richard fights with Capoeira moves. In the first Fatal Fury, he had a move which he grabbed the ceiling of his stage and kicked the enemy. 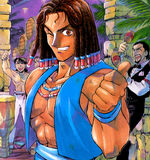 Bob Real Bout Illustration, Richard is in the background

Bob and Richard in Fatal Fury 3

KOF: Fantasy, by Ogura
Add a photo to this gallery

Retrieved from "https://snk.fandom.com/wiki/Richard_Meyer?oldid=149079"
Community content is available under CC-BY-SA unless otherwise noted.