Garou: Mark of the Wolves
The 7th episode of FATAL FURY... Two new competitors each bursting with an arsenal of dazzling moves... And the Oversway system to heat up the competition... This is the series' most furious battle yet.

GET IN THE RING! A warrior's challenge awaits you!

The Newcomers... Those who only want to ultimate power. It's never ending fight for all martial artists. New challengers are added and the gathering of wolves is held once again! The iron-fisted yet rude Li Xiangfei and Rick Strowd, the man who calls the wind. Will the abilities of these two people really be like no other fighter? And will Terry, Andy, Geese and the other regulars get their fighting in? Only the last one standing will truly earn their title as the best...

Most of the fighting arenas consist of 2 planes: front and the back. The fighters always start on the front plane and throughout the battle, the fighters can temporarily move along the back plane for strategic fighting and avoiding attacks. Each fighter can even execute lunging attacks toward an opponent on the opposite plane or force attack him towards the same plane. However, attacks are limited when you are in the back plane, nor two characters can be at the back plane at the same time. Use oversway techniques to sneak around the opponent!

Going back to the roots of the original Real Bout, characters can only stay in the background for a limited time as sidestepping. The walls are also removed altogether from the first 2 games. Instead, certain arenas only have 1 line, where oversway moves and attacks that involve changing planes will not work, giving definitive restrictions to potential fighting tactics.

The new characters added to the roster are:

USA (Highway) — Terry (Day) & Rick (Sunset): A desert highway next to a gas station. Can be seen a shack, plaques, outdoors, desertic moutains and a bucket.

Japan Tree — Andy (Night) & Mai (Day): A sakura tree next to a warehouse and a small stair. Can be seen the petals falling and a wire fence and wood surrounding the tree. In Andy's version of this stage, can be seen the full moon.

Japan (Withering Night) — Sokaku: The same stage of Andy and Mai, but it's a dark and somber air and the sakura tree is leafless. Also can be seen a small rain falling on the stage, besides a puddle.

Thailand — Joe, Franco & Bob: The city of Bangkok, in a ring next to the Grand Palace. Can be seen a crowd, bronze elephant statues, plaques with the characters name and, in the background, the Guard Daenoms.

South Korea — Kim & Tung: The courtyard of the Hwaseong Fortress, in the city of Suwon. The fight takes next to the gate. Can be seen pagodas, flags, a Yin Yang sign in the gate, stairs, a soccer, a vase and cauldrons.

Southtown — Mary & Duck: A street, next to two grocery stores. Can be seen some houses, stairs, a culver cover, a clock tower in the background, a public phone, a hydrant, a garbage bag and lightposts, one of them with direction signs, besides a poster with the game's logo (right) and a graffiti TERRY'S ON FIRE (left).

China (Jam) — Hon (Sunset) & Xiangfei (Day): A Chinese community in South Town. Can be seen a tradicional gate, buildings the Imperial palace, the Ms. Lee Pawn Shop, plaques and banners with the expression CHINATOWN 1998. Also features a mess of people and animals in vehicles (some crying, other doing things as preventing pigs from eating tomatoes from a delivery, protesting, running and removing deliveries from a van). Similiar to Pai Long's stage in AOF 2, and a similiar version can be seen in KOF '98 UM.

China (Sanctuary) — Jin Brothers (Day — Chonshu; Night — Chonrei): A courtyard with a dragon-shaped fountain and a floor with a red blazon. The fountain features crystal balls with flames.

Hong Kong — Cheng & Yamazaki: A terrace next to a neon sign. Can be seen buildings, Chinese laterns, outdoors (one with a woman model) and other neon signs.

Stroheim Castle — Krauser (Night — Right) & Laurence (Sunset — Left): The courtyard of the famous German castel. Can be seen a red carpet, flags, moutains, a estate in the background and crows, beside candles.

USA (Interior) — Alfred: An airplane crash next to the Monument Valley. Can be seen the airplane crashed, a plaque FOV SALE 300 ACRES, a wooden fence with the expression NO ENTRY WITHOUT PERMISSION and Alfred's company, hanging on one of the wings of the plane.

Fatal Fury: First Contact, a game loosely based on Real Bout 2, was released for the Neo Geo Pocket Color. This version adds a new character named Lao, who is playable in the game's Versus Mode only. Also, there are only twelve selectable characters: Terry, Andy, Joe, Mai, Kim, Yamazaki, Rick, Xiangfei, the bosses Billy, Krauser and Geese, and secret character, Alfred.

Real Bout Fatal Fury 2 is also included in the compilation Fatal Fury: Battle Archives Vol. 2. The version of Real Bout 2 includes, in this compilation, Alfred as a playable character.

In Japan, Game Machine listed Real Bout Fatal Fury 2: The Newcomers on their May 1, 1998 issue as being the most-popular arcade game at the time. According to Famitsu, the Neo Geo CD version sold over 11,821 copies in its first week on the market. 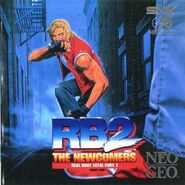