Real Bout Fatal Fury, released in Japan as Real Bout Garou Densetsu (リアルバウト餓狼伝説, Riaru Bauto Garō Densetsu, "Real Bout Legend of the Hungry Wolf") is a 1995 fighting game released by SNK for the Neo-Geo arcade and home platforms. It is the fifth installment in the Fatal Fury series, following Fatal Fury 3: Road to the Final Victory. Garou Densetsu The Legend of Wild Wolf borrows story elements from this game and Wild Ambition.

A translation of the story officially given by SNK is as follows:

With the fight for them over, the ruler Geese Howard has the Jin scrolls in his hands.

"Hehehe...this means that I have all three scrolls in my possession..." He promptly turns to the man with a bandana.

"Billy, dispose of them."

"None of these scrolls will have any of the secrets I need. It's enough to be considered the strongest for obtaining these legendary scrolls. That's all. As long as I know that I am the first person to have collected these in its 2,000 years of history, I will never have a use for these."

"But still, even if you do not dispose them..."

"These scrolls have a different meaning with those Jin brothers. I don't want to understand what they're capable of in their hands."

"...Even the newly revived Geese has something that he fears then..."

"Do not misunderstand me. Even the Geese Howard resurrected from darkness doesn't want to repeat the same mistakes...Like with those foolish Bogards..."

Billy Kane was petrified and could not bring himself to speak against the flames of dark hatred that burned within Geese. Geese shuts his eyes deeply and moves to glance outside the window.

"Billy, how is the city's current reaction?"

"Sir, they are frightened by your apparent defeat," Billy managed to answer.

"Is King of Fighters' arrangements all in order?"

"Yes, sir. Kim Kapwhan, Duck King, and all of the other recipients seemed to have responded positively."

"Hehe...that last tournament didn't profit me at all. It's time to remind them that Geese Howard is this town's only ruler."

Its long silence broken, Geese Tower's lights kick alive. When the wolf's fangs thirst for blood, a shiver can be felt throughout the town.

After stealing the Jin Scrolls of Immortality, Geese Howard takes control of South Town once again. He hosts a new King of Fighters tournament and invites his arch-nemesis Terry Bogard, to settle their fight once and for all!

Geese Tower (Final Stage)
Add a photo to this gallery

Note: When a fighter overcomes the ends of the stages, he is automatically defeated. 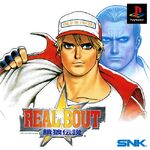 PS1 cover, showing Terry and Geese. Illustration by Shinkiro
Add a photo to this gallery

Retrieved from "https://snk.fandom.com/wiki/Real_Bout_Fatal_Fury?oldid=148462"
Community content is available under CC-BY-SA unless otherwise noted.