Medal awarded from the President of the United States

Ralf Jones (ラルフ・ジョーンズ) is a character from the Ikari Warriors, Metal Slug, and The King of Fighters series. He also starred as the player character in the shooting games T.N.K. III and Iron Tank. His official nickname is "The One-Man Army" (ワンマンアーミー).[1][2][3]

Keiko Ijuu states that his visual appearance in Ikari Warriors was based on Sylvester Stallone's role as Rambo, which was popular at the time of his conception.[4] During the early stages of KoF '94, the development team intended Ralf and Clark to be shirtless in order to express the feeling of "Ikari" or rage. But the higher ups ordered them to update their designs to look a little more modern.[5][6] In order to differentiate the duo, the designers gave Ralf a bandana and Clark a hat, then later sunglasses.[7]

Ralf, and his fellow agent (and good friend), Clark Still, started out as palette swap characters in Ikari Warriors. In KoF '94, Ralf and Clark were very similar in looks and move repertoire, but by 1995, Clark got a newer stance and win pose, while Ralf retained his old ones. In every new instalment of the KoF series, Clark seems to be further and further differing from Ralf; while Clark is a powerful grappler, Ralf is more of a power player, making use of some very efficient long-range attacks. Both characters were redesigned in KoF '99. He is also a playable character in Metal Slug 6, where he has the ability to use his punch to knock out vehicles and can survive up to two shots.

For The King of Fighters XIV, Nobuyuki Kuroki wanted Ralf's shirt to look like Bruce Willis in the film Die Hard, where his shirt starts to get grimy from all the sweat and dirt. However the rest of the staff was against this idea.[8] The team also reverted Ralf back to his classic look making him slimmer than he was in KOF XIII.[9]

Ralf is a hot-blooded guy that only cares for action, being the counterpart of Clark in many ways. Although he doesn't always show it, he experienced his share of losses from war and will drown his sorrows away with a drink. He is especially protective of any new recruits that come under his command, and will try his best to care for them, especially Leona. This can be particularly seen in the ending of KoF '97 where Ralf gives his bandanna to her, as well as in KOF: Maximum Impact 2 and KoF XII, referring to her as 'princess' when winning against her and in his profile. He also cares for Whip, seeing her as like a kid sister to him, though she doesn't like being called Whippy by him.

Ralf primarily uses the mercenary combat style of the Ikari Warriors. He knows some wrestling moves and at least one striking martial art. His blows are characteristically accompanied by explosions on impact. He is also somewhat renowned for lacking any command normals (not counting the Maximum Impact series) until KoF XII. 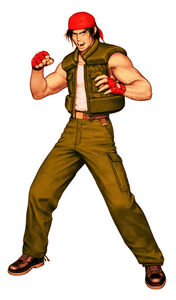 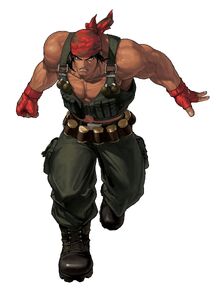 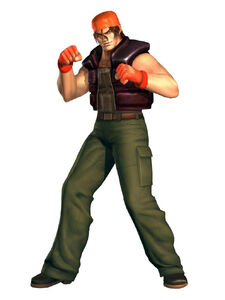 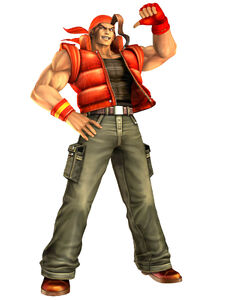 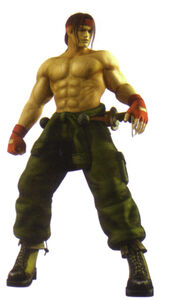 Another design in the Maximum Impact series.

The King of Fighters XIV artwork 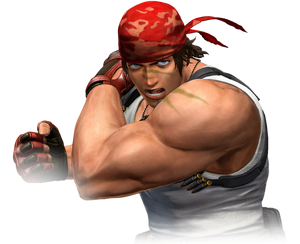