The sea and mountains

Rai Bakuoh ( ) is the main character in Waku Waku 7. His official nickname is "The Sneaky Blitz Boy" and he represents the red Waku Waku ball, making his power gemstone a ruby.

Rai is a delinquent school boy who ditches school for long rides on his bicycle. Donning his goggles, scarf, and jacket, he dreams of one day becoming a great hero. He is in the hunt for the Waku Waku balls for the thrill and his only wish is to continue to his journey.

An adventurous and reckless boy who wants to explore the world. The game suggests that he and Arina are a couple, much to the latter's denial.

Rai is a balanced fighter with no real strengths or weaknesses. He is easy to use and his fighting style is the counterpart to Arina's. 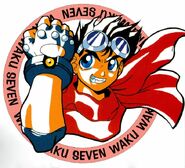 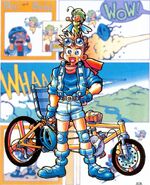 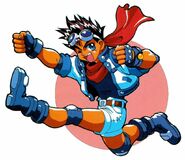