Poppy is a dog Galford adopted before he departed for Japan. She grew up during Galford's training and became his constant companion. In her ending for Samurai Shodown V, she sacrifices herself to save Galford while he was saving one of her puppies. In honor of her memory, Galford renames one of her puppies in her name. Throughout the series she remains a loyal companion.

Happy to be at her master's side and willing to do what she can to help him in his battles for justice. If Galford is defeated she will sadly howl.

With a special input, the player can order Poppy to headbutt, bite, or drop from above on their opponents. She may also piledrive her foes during Galford's desperation move -which relies entirely on her- in Samurai Shodown II. In Samurai Shodown III, Galford's Slash form relies on Poppy for a vast majority of his special moves. She retains her attacks from before but can also be kicked as a projectile and replicate Galford's movements in his desperation move. When utilized strategically, she can distract opponents whilst the player moves Galford into a more favorable position or act as a counter against most projectiles. In Samurai Shodown VI, Galford can also order Poppy to teleport or change her attacks during her initial charge.

However, she is not invulnerable to attacks as opponents can strike her down to diffuse her advances, leaving her unusable by the player until she recovers. Players also have to be aware of which direction she is facing when summoned as she may charge in a direction opposite than intended. This problem is minimized in Sen as she teleports in battle to attack where Galford is pointing. 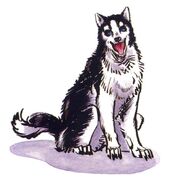 Poppy as illustrated by Shiroi Eiji. 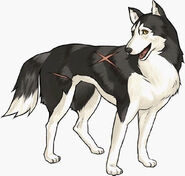