Panni (パーニー) is a character created by Masami Obari for Fatal Fury: The Motion Picture and remains exclusive to that anime title. She is depicted as a pink haired woman wearing red armor. She is a servant of the movie's main villain Laocorn Gaudeamus and has the ability to create and control water.

Jamin, Hauer, and Panni were servants of the Gaudeamus family of Rhodos Island, and each of them had special powers relating to the elements. When Laocorn Gaudeamus decided to search for the six pieces of the Armor of Mars and be the owner of its divine power, the three followed him, even though Jamin and Panni secretly disagreed with their master's new ways. Panni secretly is in love with Laocorn.

Together, they retrieved two pieces of the armor, before retrieving The fourth from Cheng Sinzan, who they made wear a special mind controlling mask and used him to find Laocorn's sister, Sulia. When Sulia recruited the help of Terry and Andy Bogard, Joe Higashi and Mai Shiranui to find the pieces of the armor before Laocorn, Jamin and Hauer were sent to follow Sulia and her partners, and Panni was later sent to Stroheim Castle to retrieve a piece of the Armor of Mars, but was confronted by Laurence Blood. She defeated him and retrieved the breastplate of the Armor.

After Laocorn acquired the breastplate of the Armor, only the mask was left missing, so he sent Jamin, Hauer and Panni to Jerusalem, Israel where Sulia discovered it to be the location of the last piece. The three of them confronted Mai and Andy, while Hauer was able to make Joe and Terry pass out, but Hauer and Panni were defeated by Andy and Mai, respectively, while Jamin took Sulia to Laocorn. It's not clear what happened to her after this. She is last seen falling backwards after being hit dead-center by Mai's Chou Hissatsu Shinobi-Bachi attack, and was knocked unconscious. Unlike Hauer who was killed by Andy. Panni called out Larcorn's name as she passed out.

Panni is extremely loyal to Laocorn and will do anything he commands, but she secretly worries about him and fears what he may become when he finds all the pieces of the Amor of Mars.

She fights mainly with her powers at long range, but also employs an acrobatic style that is also complemented by hidden sharp nails used to cut her enemy. 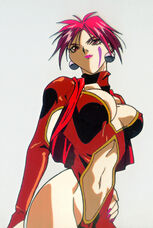 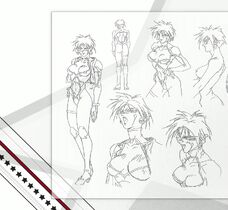 Panni character concept.
Add a photo to this gallery
Retrieved from "https://snk.fandom.com/wiki/Panni?oldid=149098"
Community content is available under CC-BY-SA unless otherwise noted.