Up to two players, alternating

Arcade (Taito 8080), PlayStation 3, PlayStation Portable, PlayStation Network
Ozma Wars is an arcade shooting game developed by Logitec and published by Shin Nihon Kikaku for the Taito 8080 system. This game is known as the second video game with vertical orientation and the first videogame with "levels different".

Ozma Wars is widely regarded as the first video game officially released by SNK, then known as "Shin Nihon Kikaku". The company had been founded the previous year, in July, 1978. Many characteristics of Ozma Wars, like the scale of energy and the change of levels, ave been used in many later videogames.

It was released for the Taito 8080 system, which had previously released the Acrobat, Barricade and Barricade II video games, Blue Shark, Hustle and the famous Space Invaders. In 1980, Shin Nihon Kikaku launched the game Safari Rally for the same platform.

There are two known versions of this game called Space Phantoms and Solar Flight. In Space Phantoms, the player's ship looks like an angel, and enemies appear as different types of insects. Because the game was monochrome and was a conversion team for Space Invaders, many Ozma Wars monitors still used the Space Invaders color overlay.

The player controls a spaceship to defend against UFOs, meteors and comets. Instead of lives, the player receives a reserve of energy that decreases constantly; when hit by the enemy, the game will shop momentarily while a large amount of energy is depleted. From time to time, a mother ship (Yamato) will appear and engage with the player's spaceship, causing the energy to be replenished. There are 3-4 recognizable "stages" as the game progresses and new enemies begin to appear. After this, the refill ship will appear and the cycle will begin again; this happens indefinitely. 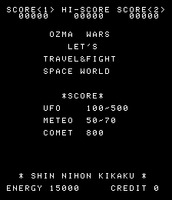