Orochi (オロチ, Orochi) is the main antagonist and final boss of The King of Fighters '97. It and its followers are another interpretation of the mythical eight headed serpent, Yamata no Orochi. In the KOF series, Orochi was sealed 1,800 years ago by the three sacred treasures of Japan. The three clan's descendants are charged with protecting the seal over it.

Orochi is a divine being who calls itself "Gaia's Will" (地球意志, Chikyu Ishi). It was supposedly born from the earth itself, manifested through floating emotions and substances of nature. Orochi's main power is "nothingness", implying that the god has no distinct gender. It is hinted to be the equalizing force between humans and nature. Since ancient times, Orochi was nature's guardian and was granted with many of its powers. It gained followers to its cause and eventually formed a clan. The eight strongest warriors were known as the Hakkesshu. As mankind began to grow in numbers, however, the natural balance began to crumble.

1800 years ago, Orochi could no longer tolerate the destruction as a byproduct of human progression and wanted to completely wipe humanity from existence. It used the powers gained from nature purely as a tool for chaos. Its clan and the human race waged war until the Kusanagi, Yata, and the Yasakani defeated it with three mystical treasures. The Hakkeshu and Orochi were defeated and sealed. Though kept in a suspended state, Orochi continues to feel that mankind pollutes the world.

Orochi's loyal servants continue to work to break its seal until Orochi is able to break free from it. In The King of Fighters '97, Orochi possesses Chris's body and wants to continue its previous desire to cleanse the world. The three sacred treasures work together to defeat it and seal it away.

By The King of Fighters 2003, a group of servants of another deity created by Gaia broke the Orochi seal. They are known as Those from the Past, and plan to take Orochi's power for their master, Saiki. Ash Crimson steals two of the three sacred treasures for seemingly this purpose, but in the end betrays them during the climax of The King of Fighters XIII. Once Ash disappears from the present, the treasures are restored to their rightful owners.

In The King of Fighters XIV, Orochi's soul was residing within Verse. After Verse is defeated, Orochi lands in Hungary, but cannot maintain without a catalyst as Chris was resurrected in a new body elsewhere. It is found and sealed once again by the three sacred treasures.

Orochi is a powerful being that plans to serve Gaia by all costs. It will protect her from anything, even from what she created herself. It shows no mercy to humans, citing their sins and their harmful self-destructive acts, although it grudgingly does acknowledge their potential to be able to change for the better.

Orochi has an incredible set of powers. It can give powers to the Eight Heads of Orochi.

Orochi fights mainly with its powers. A very unique thing about its moveset is that while kanji are used, they all seem to have alternate furigana readings that give off somewhat different meanings.

Coincidentally, it also shares animation for some of its kick attacks with Rugal (his Genocide Cutter & Double Tomahawk). Orochi is also one of the few characters who has a move that only inflicts damage upon its opponent falling to the ground from a normal knockdown.

The aforementioned tomahawk kick was inherited by Mizuchi while he retires it completely in 98UM in favor of a new set of kick moves. His Genocide Cutter imitation becomes a full-fledged land-based anti-air special attack as well.

The King of Fighters '97 official artwork. 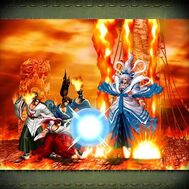 The battle from 1800 years ago, as seen and being depicted from The King of Fighters: Kyo video game.
Add a photo to this gallery
Retrieved from "https://snk.fandom.com/wiki/Orochi?oldid=144840"
Community content is available under CC-BY-SA unless otherwise noted.