People who stop his ambitions

Undetermined (He starts things and then gets tired of them)

None (he's good at billiards, though)

Aiki-Jujutsu and chi techniques from the Hakkyokuseiken school

Nightmare Geese (ナイトメア・ギース) is the nightmare manifestation of Geese Howard in the games where he is canonically considered dead.

Nightmare Geese, in the Fatal Fury series and the KOF: Maximum Impact sub-series, looks exactly like Geese, only with a ghastly ring surrounding where he stands. In The King of Fighters XIV, he now looks true to his name; a rotting corpse with grey-black skin, pure white eyes and greying hair. His clothes are also torn.

As Nightmare Geese is the ultimate fate that lies before Geese Howard, his life is exactly the same. The Fatal Fury series gives two different origins for the phantom: he may only haunt people's dreams or he may be an illusion cast by the Jin Scrolls. It's implied that the latter appears as a normal Geese in Real Bout Fatal Fury 2: The Newcomers; he leaves his legacy in Billy Kane's care before disappearing from existence.

The King of Fighters XIV has him be a DLC costume for Geese; upon wearing this costume, Geese also has a distorted voice. Also, unlike previous appearances, this version of Nightmare Geese has a phantasmagoric appearance. In its retold manga adaption, The King of Fighters: A New Beginning, Nightmare Geese is depicted as a demonic form after Geese absorbed Verse's power for himself. He was defeated by Shun'ei, with the combined efforts of Terry Bogard, Andy Bogard, Joe Higashi, Tung Fu Rue and Meitenkun, causing Verse to disperse from him and to revive several fallen adversaries in the process.

Geese's fighting style remains generally unchanged, but this version is more powerful and faster than the normal Geese. He has an aura of chi energy around his feet that stays active mainly in his idle stance.

Notable differences include the inclusion of his Double Shippuuken (Double Hurricane Fist), which was infamous for both absorbing projectiles and hitting overhead (or low when near the opponent's feet), the Reppuuken becoming being a tall crescent wave and his Double Reppuuken being a tall projectile that is notably difficult to short-hop over, while his Ja'ieken was known for being covered in flames while having Geese face the background instead of the foreground. This version also was the first user of the "claw"-variation of the Raging Storm, as well as having an exclusive counter-throw technique known as the Ura Kumo Kakushi (Reverse Cloud Covering), a technique were Geese blocks his foe's attack and shoves them aside to open them up to further attacks.

While balanced in Maximum Impact 2 and Regulation A more akin towards his normal-self's attributes, Nightmare Geese was notably overpowered in both his debut and in KOF 2002: UM. In the latter game, his HSDM/MAXDM is a combination of two techniques that debuted in Wild Ambition, the Raging Dead End (a counter-technique that involved powering up his hands with an aura) and the Kokuu Reppuuzan (Empty Air Gale Slash; a rapid succession of Reppuuken ending with a double palm blast). When Geese activates his Raging Dead End, he reverts to a modified version of his stance from KOF '96.

Ironically, via his Real Bout 2 appearance, Geese's moveset while still a bit reminiscent with traits that his Nightmare form shares, is notably watered down due to a number of his signature specials being removed, despite having new ones being added. This form is more re-balanced as EX Geese in '98: Ultimate Match via re-adding most of his attacks while still having differences between him and his other normal self. Nightmare Geese in both of these appearances however, did not have his signature chi aura around his feet.

Oddly enough, his SvC Chaos and vanilla 2002 versions are examples of Geese being a combination of both his normal-self and Nightmare-self via the taller Reppuuken projectiles (though the arm motions used are more akin to '96) and the claw-version Raging Storm while also lacking the aura.

KOF 2002: UM retains his unlockable move from Dominated Mind known as the Ashura Shippuuken (Asura Hurricane Fist), a DM version of Shippuuken where he dashes forward with a Ja'eiken to floor his opponent, then bombards them with a barrage of blazing Shippuuken.

Akin to his normal self, Nightmare Geese also possesses a unique version of the Raging Storm that is done under specific circumstances; in Nightmare Geese's case, the SDM version of the attack in 2002 UM references the stronger version that can be done after a unique combination of inputs that would stun the opponent upon the final hit, turning his incoming Raging Storm into a red version. This version first debuted for normal Geese in Fatal Fury 3, where every other character had unique requirements for their stronger-version DM's. 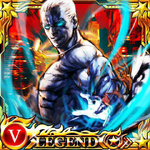 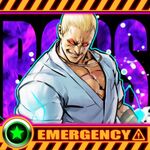 Nightmare Geese from The King of Fighters XIV artbook 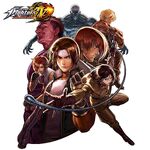