Arcade, Neo Geo, Neo Geo CD, Neo Geo Pocket Color, Wii Virtual Console, iOS, Android, PlayStation 4, Xbox One, Nintendo Switch, Microsoft Windows
Neo Turf Masters (known as Big Tournament Golf in Japan) is a Golf game developed by Nazca (the people behind the Metal Slug series) and released by SNK for the Neo Geo. The game included a VS mode and three single player modes, as well as having six players to choose from. You can choose to play one of four courses, Australia, USA, Japan and Germany. You can also choose to play as one of six golfers all with various skills.

Neo Turf Masters it was released as an arcade cart (MVS), home cart (AES), and for the Neo Geo CD console, as well as SNK Arcade Classics Vol. 1 for PS2 and PSP. The game was notable similar to Irem's Major Title, because Nazca was formed by many of Irem's ex-staff.

A version for the Neo Geo Pocket Color was later released in North America in 1999. The NGPC version features cartoonish, less detailed graphics compared to the Neo Geo version which had partially digitized sprites and realistic art. 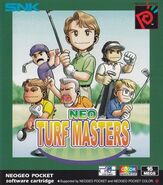