Neo Geo Mini is a dedicated miniature home arcade console developed by SNK as part of the company's 40th Anniversary celebration, released on July 24, 2018. The new hardware is packed with 40 built-in Neo Geo titles and was made to thank all the fans that have supported SNK series such as The King of Fighters, Fatal Fury, Samurai Shodown, Metal Slug, and more.

The design for the Neo Geo Mini is inspired by the original MVS arcade cabinet, with a joystick style controller, stereo speakers, and a 3.5 inch display. Each side has a USB-C port for controller support, while the back of the unit features the power switch, a USB-C port to power the unit, a headphone jack, and a mini-HDMI port to connect to an HD television. Aside from the Mini itself, the package includes a USB power cable, two mini-marquee stickers that can be placed directly above the screen, and a Neo Geo sticker.

The Mini can be seen as SNK's attempt to ride the wave of the recent popularity of dedicated miniature game consoles such as the NES Classic Edition and SNES Classic Edition, and even features a similar main menu and also allows four save states for each game. True to its arcade roots, however, is that each game can be played directly on the Mini itself, or it can be connected to a television to play on a large screen, with the Mini itself serving as a controller.

Many accessories created for the Mini are sold separately. A plug adaptor for the USB cable must be purchased separately and is required to power the unit. An SNK-branded mini-HDMI cable, official screen protector and additional marquee stickers can also be purchased online. Two Neo Geo controllers have also been developed exclusively for the Mini, colored black and white, which can be plugged into the sides of the unit into the USB-C ports. At least one controller is required to play games in 2-Player mode. While similar in appearance to the original Neo Geo CD gamepad, the face button layout is different and the joypad does not feature the microswitches that gave the original controllers a clicking sound.

The games included are all based on their AES Home versions. While certain games have additional features not found in their MVS arcade versions, such as playable bosses, adjustable difficulties and training modes, players are also given a small number of credits to play each game. Fortunately, the Mini also emulates the Memory Card feature of the home versions, allowing players to manually save their progress upon receiving a Game Over, and loading a save starts the player at the last level they lost at. There are some exceptions to both features: Some games such as Magician Lord, Blazing Star and Puzzled grant infinite credits, and the Memory Card feature is absent in both Shock Troopers games.

If connected to an HD monitor or television, the video output will switch to it while a Neo Geo logo is shown on the Mini, and some display options can be modified. The games can be played in either 4:3 or 16:9 aspect ratio, and another option exists to stretch the image beyond the television screen. The game window is stretched to the size of the screen at 720p, and while there is a pixel smoothing option, there are no additional filters such as interlacing, CRT or unsmooth square pixels.

Shortly before the Mini was released in Japan, SNK announced a seperate version, the Neo Geo Mini International for the worldwide market, which would also feature 40 titles but with some differences in its game selection. Following the release of the International version, SNK announced a Limited Christmas Edition which includes 48 games, an HDMI cable, two controllers, extra marquee stickers, an anti-slip pad and comes in a unique package. Only 15,000 units were produced and the initial cost was nearly twice as much as the other versions (¥21,500 compared to the Mini's ¥11,500). The games in the Christmas Limited Edition are based on their overseas versions.

On January 14, 2019, the Neo Geo Mini x A.C.E. Special Limited Edition was announced as an exclusive release in China as a collaboration between SNK, A.C.E. (Accessory Culture Evolution), a brand founded by Chinese-Canadian singer and actor Kris Wu, and Xiaomi, which would distribute the unit on their website. This version has a gold and black color scheme. It debuted at the price of ￥688/ HK$797 ($103 USD), which includes one controller. It was stated to launch on January 17, 2019, but was delayed due to a shortage of supplies, although testing and review units were made available through other vendors.

On May 10, 2019, SNK announced the Neo Geo Mini Samurai Shodown Limited Set will be released in Japan on June 27, 2019 to promote the release of Samurai Shodown (2019). This version was originally released with in three color variants, each based around the characters Haohmaru (White), Nakoruru (Red), and Ukyo Tachibana (Blue). Both controllers and the HDMI cable are included, as well as two character stickers, four character cards, and a non-slip pad. 40 games are included and contain all of the Samurai Shodown games unlike the other releases, and are all the Japanese versions. A bundle that includes the PS4 version of Samurai Shodown (2019) could be ordered on the SNK Online Shop. It launched at the cost of ¥15,000 and only 20,000 of each unitwas produced. It was also made available through American retailers for $139.99.

SNK announced in August 2019 that a special limited black variant featuring Kuroko would be released on September 30, 2019 in Japan for ¥21,500. Only 3,000 units were produced and includes 48 games. Another version of this was released in the American and European markets on September 20, 2019, but only includes the same 40 titles as the earlier Samurai Shodown versions.

The Mini was succeeded by the NEOGEO Arcade Stick Pro, a large arcade pad that similarly contains many pre-installed games and can be used as a controller for a wide variety of platforms, including the Mini, while the controller pads developed for the Mini are also compatible with the Stick Pro.

The console has been released in multiple versions, each containing different titles and their own exclusives:

There are a total of 66 different titles between all versions. 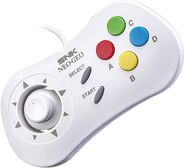 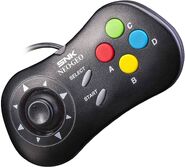 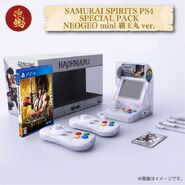 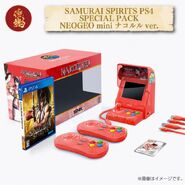 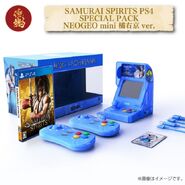 NEOGEO mini –Trailer
Add a photo to this gallery

Retrieved from "https://snk.fandom.com/wiki/Neo_Geo_Mini?oldid=146398"
Community content is available under CC-BY-SA unless otherwise noted.