Neo Geo (ネオジオ) is a family of video game hardware developed by SNK. On the market from 1990 to 2004, the brand originated with the release of an arcade system, the Neo Geo MVS and its home console counterpart, the Neo Geo AES. Both the arcade system and console were powerful for the time and the AES allows for perfect compatibility of games released for the MVS. However, the high price point for both the AES console and its games prevented it from directly competing with its contemporaries, the Sega Genesis, Super NES, and Turbo-Grafx 16. However, the MVS arcade became very successful in stores in Japan and North America.

Years later, SNK released the Neo Geo CD, a more cost effective console with games released on compact discs. The console was met with limited success, due in part to its slow CD-ROM drive. In an attempt to compete with increasingly popular 3D games, SNK released the Hyper Neo Geo 64 arcade system in 1997 as the successor to its aging MVS. The system did not fare well and only a few games were released for it. A planned home console based on the hardware was never released. SNK later extended the brand by releasing two handheld consoles, the Neo Geo Pocket, and later Neo Geo Pocket Color, which briefly competed with Nintendo's Game Boy. Soon after their release, SNK encountered various legal and financial issues - however the original Neo Geo MVS and AES continued getting new games under new ownership until officially being discontinued in 2004, ending the brand.

Regardless of the failure of later Neo Geo hardware, games for the original MVS and AES gave been well received. The system spawned several long-running and critically acclaimed series, mostly 2D fighters, including the Fatal Fury, Art of Fighting, Samurai Shodown and The King of Fighters (series), as well as popular games in other genres such as the Metal Slug and Baseball Stars series. In December 2012, SNK Playmore realeased a handheld console based on the original AES, the Neo Geo X. As of March 1997, the Neo Geo had sold 980.000 units worldwide. The Neo Geo Pocket Color also has been given praise for multiple innovations, and a very substantial library, despite its short life.

On May 9, 2018, SNK announced the Neo Geo Mini, as part of the company's 40th anniversary celebration. The new hardware is packed with Neo Geo titles and is being made as a way to thank all the fans that have supported SNK series such as The King of Fighters, Fatal Fury, Samurai Shodown, Metal Slug, and more.[1] 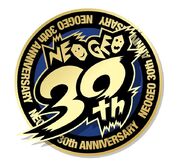