(Something on his) forehead, Destruction, extermination, final moments

None (He doesn't eat)

None (He doesn't listen to music)

Various weapons within his body

Neo Dio (rendered as ) is reoccurring antagonist and boss character in the World Heroes series.

Because of the failure of his previous creation, Geegus, Damned created a new, stronger, better artificial soldier: Dio. But Dio developed his own consciousness and now roams different eras, killing many people.

After his defeat in the second game he uses Damned's technology to improve himself, returning later to exact revenge for his defeat. He kills Zeus during his confrontation with the World Heroes and challenges them to a fight, once again ends defeated.

Neo Dio is a highly destructive maniac that hates peace. He believes himself to be the ultimate lifeform and thus invincible.

His fighting style stems primarily from his physiology. He attacks with blades and high-speed moves. 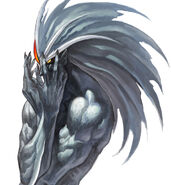